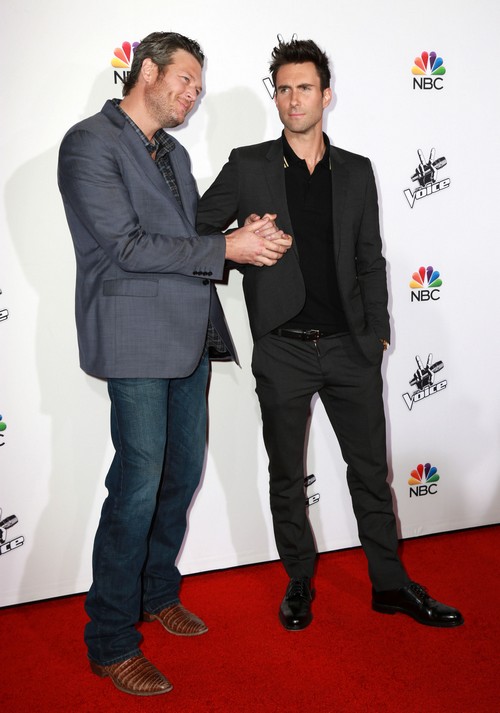 It remains a mystery whether Blake Shelton cheated on Miranda Lambert, or Miranda Lambert cheated on Blake Shelton, or both – but one thing is certain, the country music singers are divorced and their marriage is over. Blake Shelton is not wasting any time diving into the dating pool though, and his playboy pal and fellow Voice coach Adam Levine is hooking him up with some of his former flames out of his little black book.

Before Adam Levine settled down and married Behati Prinsloo, he was quite the ladies’ man and had a gaggle of hot models on speed dial. According to the latest edition of OK! Magazine, Adam is setting newly single Blake up with some of his old conquests. An insider dished to the tabloid, “Adam says he still has numbers for all of the models he used to hang out with before he married Behati. Adam keeps telling Blake that when you fall off your horse the only thing you can do is get back on.”

According to OK! Magazine’s insider, Blake hasn’t expressed much interest in Adam Levine’s sloppy seconds. Who can really blame him though? Blake Shelton has never had any issues with the ladies, as a matter of fact that could be one of the reasons his and Miranda’s marriage didn’t work out. We have complete confidence that Blake Shelton will find someone to date when he is good and ready, that is if he isn’t already dating someone on the downlow. Considering how messy his and Miranda’s divorce has been, no one could really blame him if he wanted to take some time off before diving head first back into the single world.

Do you think that Blake Shelton already has a new girlfriend? Why won’t he let Adam Levine hook him up with one of his former flames? Let us know what you think in the comments below!