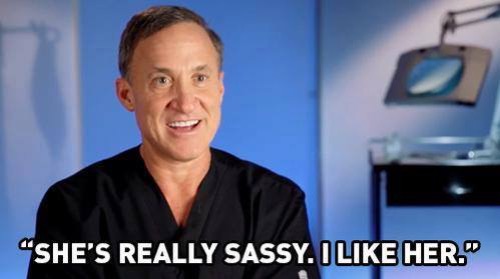 Botched continues tonight with an all new Tuesday, November 10, season 2 episode 18 called, “Where the Wildd Things Are,” and we’ve got your recap down below! On tonight’s episode, a woman who feels totally unlucky receives a boost from the doctors.

On the last episode Terry made a breast cancer survivor felt whole again; and received a visit from his favorite patient when his wife Heather showed up for a chitchat. Meanwhile, Paul worked his magic on two sisters’ twin beaks.

On tonight’s episode as  per the E! synopsis “a woman who feels totally unlucky receives a boost from the doctors; a patient who previously was rejected by the docs returns with a problem bigger than her breasts; and a transgender showgirl wants to become her favorite cartoon character.”

Tonight is going to be another crazy episode that you won’t want to miss, so be sure to tune in for our live coverage of E!’s “Botched” tonight at 9PM EST! Meanwhile, while you wait for our recap, hit the comments and let us know how excited you are about this show!

The doctors ended up running into a somewhat familiar face on tonight’s episode of “Botched”. Lacey Wildd who was once a reject for surgery was back and once again she was claiming to need the guys’ help.

Though Lacey made that claim once before. She had come to a show well over a year ago to do something about her chest. And, well, the doctors decided not to touch her. It seems they felt she had enough surgery in her lifetime that she actually advised her to give it a break.

However, she didn’t listen and that’s why it wasn’t vanity that sent her running back to Terry and Paul. She had apparently gone on to see another doctor after the guys refused to operate on her and unfortunately the one primary thing they warned about was what happened in her case. She tried to do her face again and it came out botched.

The woman known as the fourth largest chest in the world went on to have a nose job and a liquid face – lift. And at first she was happy with the results! But, as things go, it looks like no one warned about the effects of said face-lift.

Meaning she hadn’t known that injecting her face with fillers creates space or pockets if you will for the skin. And ultimately the skin begins to sag once the fillers wear off. Which is a typical thing. So her face-life worked against her because it made face inadvertently as if it had aged.

And as it turns out that nose job of hers wasn’t any better. The doctor had gone in promising to give her the small nose that she wanted and yet he made a mistake. He literally gave the effects of a pinched nose, like breathing problems for instance, without the look.

Paul later that the doctor had removed so much cartilage that the tip of her nose was without a support and was bound to droop as well as her face. So she was already left unable to breathe properly when Paul’s comments made her believe that she was going to look like anteater. And have you seen those animals?

And so maybe that’s why the guys decided to change their stance because they took on a patient that they know was too much into surgery. Though that wasn’t mere speculation on their part. Lacey did have a problem with her procedures and she knew it.

But she also claimed to have come to her senses after the botched nose job and face-lift. Lacey had even said that after she fixed her face that she wasn’t going to touch anything else on her body.

It seems her botched face had interfered with her bookings. Lacey books events as part of her notoriety for a living and lately the offers hadn’t been coming in. Though the truth of that situation was probably more about her loss in confidence in her appearance than anyone finding her less attractive. So the guys gave her the boost she needed. They agreed to do both the nose and facial-rejuvenation because apparently it doesn’t make sense to put a fixed nose on a botched face.

And the results were wonderful. Lacey came out of surgery and rehabilitation with the ability to breathe and her nose looked normal.

So the procedure was worth it. Lacey had gone through a hassling surgery because she had a lot more scar tissue in her nose than Paul had initially assessed. And then there was the problem in finding the necessary fat in her body to put back into her face. Funnily enough, the nurses tried looking for that fat everywhere before they were forced to rely on fluids from multiple parts of the body.

However she looked great afterwards and she didn’t care that her nose wasn’t as small as she wanted but that turned out to be the difference between her and Cassandra Cass. Cassandra Cass is a transgender woman who makes her living as being the Real Life Jessica Rabbit. And according to her, Jessica doesn’t have a bigger nose even if it would help her to breathe and stop her nose from constantly running during her act.

So not everyone does what’s best for them. Though luckily Sara didn’t have the problem. She came in to fix a nose that she had been talked into getting and all she wanted was to have a nose that worked. Therefore Paul took a look.

Sara had been bitten by a dog a while back and it left scar by her mouth. So Sara went to go see a plastic surgeon and he told her that if he did her nose then her mouth would look better in comparison. And so she allowed to do her nose yet she hadn’t known at the time that he was secretly doing crystal meth on the side.

Therefore Sara was left with a botched nose and her luck continued to go downhill. After her botched nose job, Sara had gone to the doctor’s where they found a tumor in her heart that was spreading into her lungs. So Sara never had a chance.

She immediately needed surgery and the doctors had to do a hysterectomy as well. But she was left with scar from her open-heart surgery and her hysterectomy left behind a scar that extended from her belly-button all the way to her yoo-hoo. So Sara called what she had Alien Birth stomach.

And it took the combined skill of Paul and Terry to fix everything.

Paul rebuilt her nose and Terry gave her a tummy tuck that could once and for all get rid of her scar. And afterwards, Sara was like a whole new person. She managed to shake off everything that had happened to her in the past to go out exercising with her friends as if she had always been this confident person not afraid to show off her physique.