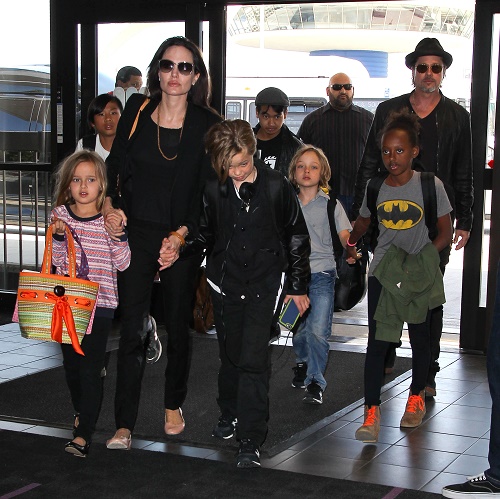 Are Brad Pitt and Angelina Jolie the royal couple of the United States? US Weekly recently reported that on their trip to the United Kingdom, Brad Pitt and Angelina Jolie finally met up with the Duke and Duchess of Cambridge, Prince William and Princess Kate Middleton. The two couples met for the first time after trying to set something up for a few months. They had tea together.

A spokesperson for Kensington Palace tells Us Weekly, “The Duke and Duchess of Cambridge met with Brad Pitt and Angelina Jolie Pitt at Kensington Palace on Friday afternoon. They discussed their shared interest in combatting the illegal wildlife trade.”

Brad Pitt and Angelina Jolie were in London early on Friday, June 26 so that Angelina Jolie would be able to attend a lunch event at the Foreign & Commonwealth Office that will take place on Monday, June 29. The event is part of her “work on UK foreign policy, and her ongoing campaign to end war zone sexual violence,” according to Us Weekly.

According to an insider, at around 3:45 PM, the Pitt and Jolie headed to Kensington Palace for an informal meeting with Prince William and Kate Middleton. The source says that both Middleton and Prince William were “really excited,” about finally getting to meet Brad Pitt and Angelina Jolie, and that the two couples enjoyed their afternoon tea. The source goes on to reveal that Prince George was also in attendance, and that the couple waited outside of their home to meet Pitt and Jolie. Brad and Angelina’s kids are in London with them, however they did not attend the meeting.

The insider reveals that Brad Pitt and Angelina Jolie brought a gift for the Duke and Duchess of Cambridge to celebrate the birth of their baby girl, Princess Charlotte, who was born last month in May. Everyone got along very well, and the source goes on to say that William and Kate were having such a nice time with Brad and Angelina, that they ended up staying longer than originally intended.

What do you think of Brad Pitt and Angelina Jolie spending time with Prince William and Princess Kate? Will these two power couples become new best friends? Let us know in the comments below.