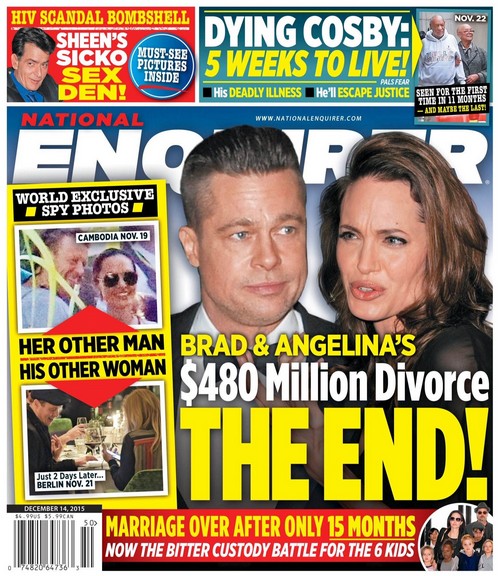 Are Brad Pitt and Angelina Jolie headed for divorce and an epic battle as Brangelina fight over who is entitled to their $480 million fortune and custody of their six kids. After just over 10 years together and 15 months of marriage, the couple is allegedly ready to call it quits after one of them has been caught catching feelings outside of marriage.

Brad and Angie broke one of their biggest rules when they parted ways to work on separate film projects. According to a National Enquirer report, separating for film projects was the kiss of death and now Angelina Jolie has been giving a lot of her attention to another man.

There are several pictures of Angelina fraternizing with a member of the film crew and it’s pretty obvious that the “By The Sea” star is absolutely smitten but the mystery man. There are several times when Angelina has been seen on the Cambodian set with the staffer. Often they are deep in conversation and Jolie seems to hang on to every word.

Naturally Brad Pitt would be devastated by news that he cannot trust his wife. Even though Jolie has reportedly not welcomed a romantic relationship with the hunky crew member, Brad still considers the way Jolie is fawning over this guy to be completely inappropriate and disrespectful to their vows.

The report goes on to claim that Brad Pitt wasn’t about to be outdone by his Oscar winning wife. Pitt has been seen bonding with his on-screen wife, Meg Tilly. The unlikely pair were seen drinking together in a Berlin restaurant while on location to shoot their film, “War Machine.”

Sources say that Brad has been spilling his guts to Meg Tilly while Angelina Jolie makes a fool out of herself over a camera jockey in Cambodia.

Now that Brad and Angelina are reported to be ready to part ways, there are a lot of questions about who gets what. The Hollywood power couple are worth a combined $480 million and with all the joint projects and nonprofits between Pitt and Jolie, it’s going to be a nightmare divvying up assets.

It’s going to get even uglier when it comes to deciding who gets the kids. Pitt isn’t about to just let Jolie take off with their six kids so be prepared not only for a money battle but for a huge custody fight too if the couple divorce.