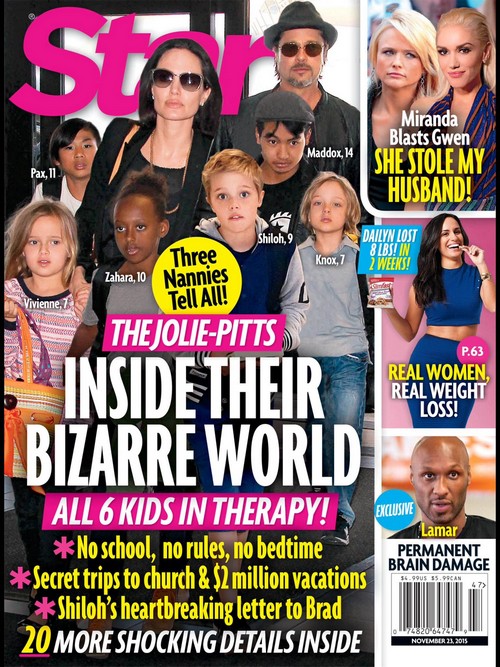 According to a new report Angelina Jolie and Brad Pitt’s former nannies have betrayed their trust and shared dirty details of how the couple raise their kids. Angelina Jolie and Brad Pitt’s six children appear pretty mainstream considering they are the children of millionaires and some were adopted from various countries and live a life of jet-setting to lavish vacations and refugee camps.

But, according to Brangelina’s squad of nannies – behind closed doors their six kids Vivienne, Pax, Zahara, Maddox, Shiloh, and Knox are living in their own bizarre little world.

This week’s cover of Star Magazine features a photo of Brad, Angie, and their six kids. The headline screams, “Inside Their Bizarre World: All 6 Kids In Therapy, No School, No Rules, No Bedtime, Secret Trips To Church, And $2 Million Vacations – The Nannies Tell All.”

The magazine’s cover goes to tease about a “heartbreaking letter” that Shiloh wrote to her dad, and several other shocking details about the Jolie-Pitt Family’s strange life behind closed doors.

One of the former family nannies dished to Star Magazine, “Brad and Angelina are very unconventional parents, to say the least. It is like they are living in a hippy commune most of the time because Angie doesn’t believe in rules. She thinks that it is important for children to have freedom of expression – but that doesn’t always work out well.”

Star Magazine reveals that the Jolie-Pitt kids do not attend regular school or classes, they are followed around by a team of tutors that home-school them. But, according to the family’s former nanny – Angelina doesn’t follow home-schooling guidelines and the kids get to pick and choose what they study and do not have to take any sort of tests or quizzes.

Interestingly enough, therapy IS a priority. Angelina doesn’t make her kids go to school – but she makes them all go to therapy …

Star’s insider revealed that Brad Pitt tries to have some sort of traditional family values – and the actor puts in some effort to try and make up for Angelina’s free-for-all style of parenting. The ex-employee revealed, “Brad is always out of bed in the morning and he likes to make breakfast for everyone. The kids get up next and Angie much later because she is a night owl. So Brad is on daddy duty most mornings.”

Another strange tidbit from Star Magazine’s nanny-tell-all, is the Jolie-Pitt kids’ religious beliefs. Apparently, Brad and Angelina have taken their kids to various different churches every weekend and multiple different backgrounds of faith, because they want their children to be able to choose which belief system they want to follow.

And, in case you were wondering why the nannies are telling all about their former employers – they are probably disgruntled by the way they were cropped out of paparazzi photos. Apparently, when the paps around Brad and Angie order the staff to stay out of the pictures because they want everyone to think that they are more “hands on” than they really are, and they take all of the credit for raising the kids.

So, what are the odds that any of Brad Pitt and Angelina Jolie’s kids turn out to be “normal?” Are you surprised by Brad and Angelina’s parenting techniques – or is it exactly what you expected? Let us know what you think in the comments below!