Brad Pitt Humiliated By Angelina Jolie: “By The Sea” Destroying Career and Marriage? 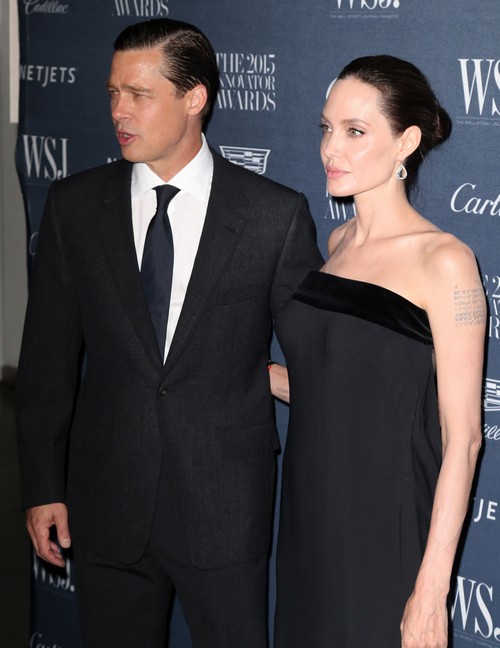 Brad Pitt is reportedly feeling humiliated by Angelina Jolie. Is the couple’s new movie “By the Sea” – which has been a total flop – destroying Brad’s career as well as the couple’s marriage?

Angelina wrote and directed “By the Sea,” and stars in the film alongside Brad. Allegedly Pitt absolutely loathes the film – sources say the actor wanted no part of it – but Angelina “twisted his arm,” making him miserable until Brad agreed to star in the movie.

Sources told Star that Pitt is also fuming because Angie has forced him to deny that the script is in any way autobiographical. Pitt is reportedly experiencing severe anxiety over whether or not he will have any credibility in Hollywood when this is all over.

“By The Sea” looks inside the marriage of a couple who have set out on a vacation in order to save their marriage. The woman in the film, portrayed by Angelina, is deeply depressed and childless after suffering two miscarriages.

Though Jolie claims that her mother Marcheline Bertrand was the inspiration for the character, there have been whispers that Angie actually based the movie on Brad’s marriage and divorce from Jennifer Aniston.

While Brad is dealing with anxiety over his career and marriage, is the actor also dealing with a very angry ex-wife? Jennifer reportedly “freaked out” after hearing the plot of “By the Sea.” Sources revealed that Aniston feels the storyline of the film is too much like the final days of her marriage to Pitt. Buzz around Hollywood was that Jennifer was demanding that the movie be pulled from theaters.

After nearly a decade together the Angelina Jolie and Brad Pitt wed in a private ceremony at Chateau Miraval in France in August 2014. Could Angie and Brad fragile marriage be over? Is “By the Sea” the movie that will end Brad Pitt’s career? Most likely no, Brad is a talented actor and it’s going to take more than one flop for that to happen.

What do you think? Let us know in the comments section below. Don’t forget to come back to CDL for more celebrity news and gossip!