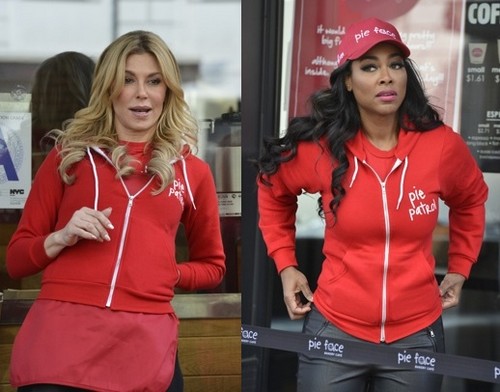 When will Brandi Glanville and Kenya Moore have that blow-up fight on Celebrity Apprentice 2015? Already Brandi Glanville and Kenya Moore are picking at each other and we’re only a few episodes in on Celebrity Apprentice. After a recent episode of Watch What Happens Live with Andy Cohen, Kenya tweeted that Brandi was “sad, sad, sad” and needed to go to rehab while Brandi claims that Kenya is wearing a weave. Maybe Kenya has a weave, who really cares? Her hair looks good so I don’t know why she’s being defensive. Famous white women also wear weaves and extensions, so it’s not something to get crazy over.

But here’s what is interesting to me. Brandi is actually behaving herself on Celebrity Apprentice 2015 which is an absolute shocker. I do love Brandi Glanville – I love the fact that she has one drink too many and puts her foot in her mouth. I love watching the other ladies on Real Housewives of Beverly Hills act shocked at Brandi’s antics even though they are no prize winners themselves. She seems so achingly human and so much more “real” than the other real housewives. She admits to Botox, to drinking too much and to being heartbroken over dirt bag Eddie Cibrian cheating with toxic LeAnn Rimes.

Brandi just doesn’t seem to be one that tries to deny her mistakes and her humanity. Lisa Vanderpump lives in a glass house with white swans and surely wants us all to believe she never defecates and that she walks on air. Kyle is grasping and keeps upgrading her lifestyle as the show goes on when she so obviously couldn’t afford the life she wanted until she got on the show. Kim – wow, don’t get me started on hot mess Kim who is just sad, even though she seems to be sober now. Eileen was a cheater too and that’s how she landed Vinny and Lisa Rinna is a human blow up doll.

Give me Brandi Glanville any day. And now Kenya Moore. First, she’s a “real” housewife of Atlanta which is the much lower rent version of the Bravo franchise. She’s been deliberately provocative, stirred up way more drama than was necessary. This resulted in her getting a beat down from Porsha (a well deserved one according to Celeb Apprentice contestant Vivica Fox) and a lot of shade from her haters of which she seems to have legions. Vivica also tweeted an accusation that Kenya stole her phone. First Porsha’s ex-hubby, then Vivica’s phone – can Kenya not keep her hands off OPP?

At first it seemed like Brandi and Kenya were going to leave the Real Housewives drama outside of Celeb Apprentice when they good naturedly put pies in each other’s faces at the Pie Face event, but it rapidly devolved. Celeb Apprentice has already filmed and was done before Brandi appeared on WWHL with Andy Cohen and talked about Kenya. She told Andy that Kenya is “a horrible, horrible human being.” But that isn’t all she said – here’s a rundown of some of Brandi’s other criticisms of Kenya (aka Krayonce):

• “She’s just miserable and wants to get attention for herself.”
• “She’s yucky.”
• Kenya’s table manners are “like a pig.”
• “She’s built like a guy. She’s real big.”
• “Every single outfit she wore always had tags. Was she taking it back? I don’t want to wear stuff that Kenya Moore has returned. Ew- disgusting.”
• She “reeks of desperation” and sweats profusely.

The bottom line is that these two real housewives really don’t like each other but I’m firmly on #TeamBrandi on this. I’m tired of Kenya reminding everyone she won Miss USA a million years ago and throwing shade at everyone else. I think Brandi is comporting herself very well on #CelebApprentice and could go far despite Kenya trying to throw her under the bus at every turn. The only thing that might take Brandi down is if she gets tipsy and has a go at Donald Trump’s ridiculous hair that everyone else ignores. And if she does get fired, I pray that she busts him out on his comb around on her way out the door. #TeamBrandi #FireKenya