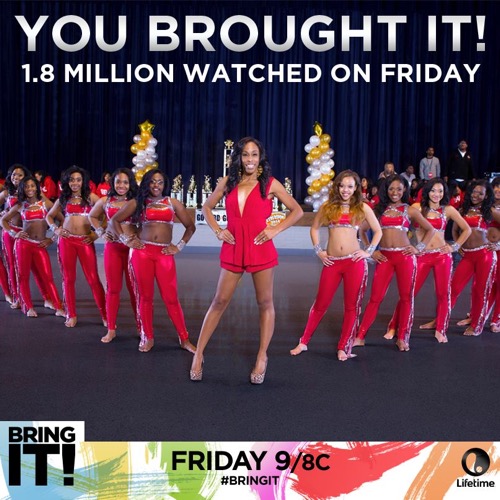 On Lifetime tonight Bring It! airs with an all new Friday January 30, season 2 episode 2 called “Miss D Loses Her Cool,” and we have your weekly recap below. On tonight’s episode, tension runs high as the Dancing Dolls face archrival the Divas of Olive Branch for the first time since losing to them in the Battle Royale.

On the last episode, it is a brand new competition season and Miss D was determined to whip the Dancing Dolls into an unstoppable dance machine! Talented new rival, the YCDT Supastarz of Miami, FL, returned to Jackson to prove their victory over the Dolls last season was more than just beginner’s luck and Dianna created an elaborate routine designed to mock their coach, Tracy. Meanwhile, new Dancing Doll parent, Tawantza, wasted no time before butting heads with Coach D after her daughter, Zatia, got cut. Did you watch the last episode? If you missed it, we have a full and detailed recap right here for you.

On tonight’s episode as per the Lifetime synopsis, “Tension runs high as the Dancing Dolls face archrival the Divas of Olive Branch for the first time since losing to them in the Battle Royale. Miss D hires male choreographers to give her girls an aggressive edge in the Hip Hop Trio category. Meanwhile, Selena and Tawantza bond; and Miss D and the Divas’ coach get into a verbal confrontation that leads one of them to make a surprising decision.”

Ms. D chose to surprise her Dancing Dolls two days before the competition on tonight’s all new episode and as it just so happens some of the parents are actually not going to like it. It seems the secret weapon Diana is intent on utilizing this week happens to be guys. That’s right she wants to use guys for her new dance routine because she feels her girls aren’t aggressive enough in their Hip Hop. And yet that makes the mothers out on the sidewalk kind of upset.

Not only is upsetting that someone besides the kids and Diana has finally been allowed into practice area but the mothers are also concerned about this guys that are going to be hanging around their daughters. As for Tim and Jay, they aren’t bad and in fact they appear to be really good dancers and choreographers for that matter. But their new and not everyone knows how to deal with them.

Like it was stated before, the guys were brought in to help with Dolls’ aggressiveness. Diana feels that her girls aren’t pushing themselves to their full potential whenever they do Hip Hop. And this week is more important than ever that they don’t mess up.

The Dancing Dolls will be facing the Divas of Olive Branch. The coach of that tem has been known to be extremely derogatory towards them and Diana in particular. A few years ago, Coach Neva had even threw Diana’s past history into her face as a way to say Diana doesn’t deserve to teach kids. So this upcoming competition is about more than just winning – Diana wants the Divas of Olive Branch to eat their words.

And to do that, Diana needs a star team. Which is why she’s pushing them so hard. Diana wants a trio Hip Hop number and she only wanted the best for it. So some people were cut.

This week, several girls were cut from the number and one of them just happened to be Sunjai. Sunjai, while a good dancer, was simple too cute for the aggrieve number the choreographers have in mind. Hence she was cut and her mother that was out on the sidewalk hadn’t liked watching that.

Selena takes certain pride in her daughter’s achievements and when her daughter got cut, yet again, she was hurt and well the other mothers didn’t band around her.

Thankfully, though Selena had made a new friend with another dance mom. Selena and Tawantza have become fast friends. And they even like to hang out when their kids aren’t practicing. But Tawantza has a habit of getting into trouble.

The last time she upset Diana, her daughter was asked to leave the studio. Yet, rather than take what happened and learn from it; Tawantza was got into it once more with Diana. And it happened on the day of competition.

Tawantza snuck backstage as the dolls were getting ready and she tried to several pictures. So Diana put a stop to that. Because as she said, parents are only allowed backstage to help and if they’re not doing that then shouldn’t be there. And, well, Tawantza had to put up a fight before she finally left.

But that was nothing. The Dancing Dolls weren’t upset by one mother and Diana going off on each other. That’s, honestly, the norm for them. What the young girls took issue with is the other dance team.

Neva and the Divas of Olive Branch pride themselves on being ladies. Yet when it came time for a Stand Battle between them and the Dancing Dolls – one side was throwing out slurs while the other was focusing on their performance.

Kayla heard the captain of the other team calling the dolls “bitches” and so she reported that to her coach. And Diana then demanded Neva handled her girls. Though Neva refused to do that seeing as she feels what happens onstage is between the girls.

And Neva also claims that Diana was the one to take things too far. She says Diana had created a scene and that’s why she took her girls out of the competition before the awards could be handed out. So Neva and her dancers had left the building by time the winner was announced.

Meaning they never heard how the Dancing Dolls had thoroughly beaten them!