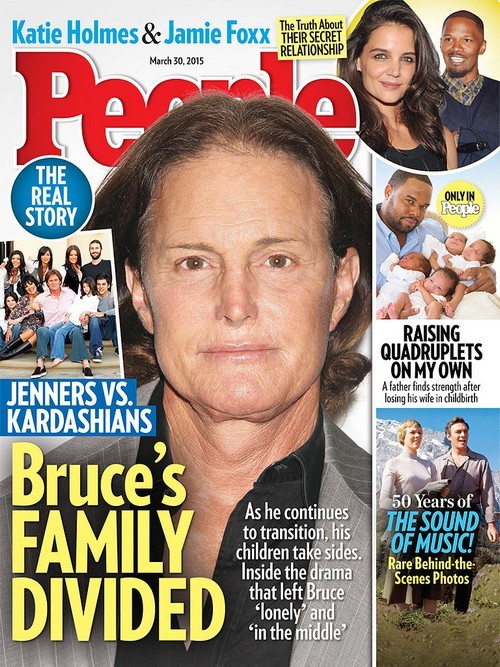 In the most non-surprising news of the month, Bruce Jenner’s family is reportedly divided on his sex change. ‘The Jenners versus the Kardashians’ cover the latest issue of People Magazine, with the report going into detail about how both families have deeply contrasting views on Bruce’s transgender sex change and his ensuing transformation into a woman.

We already know that Bruce’s sons, Brandon Jenner and Brody Jenner, are deeply against Bruce getting a sex change. Unfortunately for them, they have no say in the matter, even if their father has done everything in his power to make the news as comfortable for them as possible.

However, the bigger rift comes between him and the Kardashians – or more specifically, him and Kris Jenner. People’s Magazine’s report suggests that even more than the divorce, Bruce’s decision to come out with his sex change has caused major issues between him and Kris. Plus, the fact that he’s branching off and doing his own docu-series for E! has thrown a wrench in their relationship, since Kris Jenner now feels that Bruce is stealing attention from their family and their show. And as well know, Kris Jenner is never, ever going to be alright with anybody or anything stealing attention from her show and her ‘brand’.

At the end of the day, the Jenners and Kardashians might live very different lives, but they’re still family. People’s source says as much, and adds that even though some of them have had a difficult time adjusting to their dad as a woman, they have ultimately been supportive of his sex change. The children, specifically, have accepted that their father is getting a sex change, and that they can’t do anything about it at this point.

People’s cover issue also has an exclusive report on Jamie Foxx’s and Katie Homles’ secret relationship, which has been going on for over a year now as CDL has correctly reported . Tell us something we don’t know, People….