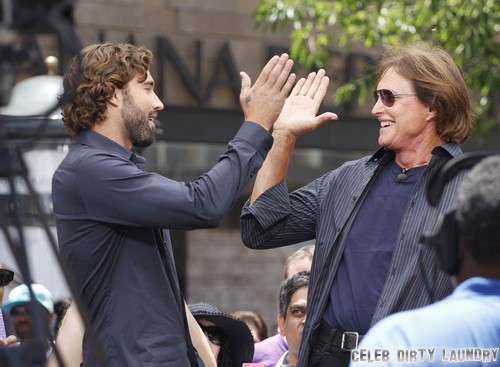 Bruce Jenner’s sex change and reality docuseries have both been put on indefinite hold after Bruce’s involvement in the fatal car crash. Initially, it was rumored that Bruce was just holding off on completing the sex change – i.e., going through with the gender reassignment surgery – until things surrounding the car crash had settled. While Bruce was definitely involved in the crash, early reports had suggested that the accident might not have been Bruce’s fault, even though it resulted in the death of an innocent woman.

But alas, after the video from the accident was released, it became quickly obvious that Bruce Jenner was COMPLETELY to blame for causing the accident. Although he tried to blame it on the car in front of him for stopping too slowly, it’s clear from the video that Bruce just wasn’t paying attention the traffic situation in front of him. He was smoking a cigarette with one hand, and he only looks up towards the end, when he slams the brakes and crashes into the Lexus in front of him. By that point, the force of the crash is enough to push the Lexus into traffic, where a Hummer crashes into the Lexus and kills the driver of the Lexus on impact.

There is a possibility that Bruce Jenner will be faced with a vehicular manslaughter charge, although authorities are still investigating the crash. A source tells Radar Online that for now, both Bruce’s sex change and his reality docu-series have been put on hold, elaborating, “There is no timetable for when Bruce will resume filming the docuseries. Obviously, it’s not the priority right now, given the severity of the situation that Bruce is facing. From a public relations standpoint, it would also be in very poor taste to be filming a reality show after Bruce was involved in the crash.”

E! is reportedly very understanding of the situation, but they kind of have to be, don’t they? They can’t exactly pressure Bruce to go through with the series when he’s faced with such a complicated legal situation. Until the police investigation is completed, I don’t see how Bruce Jenner can get back to his regular life without facing an enormous amount of backlash.