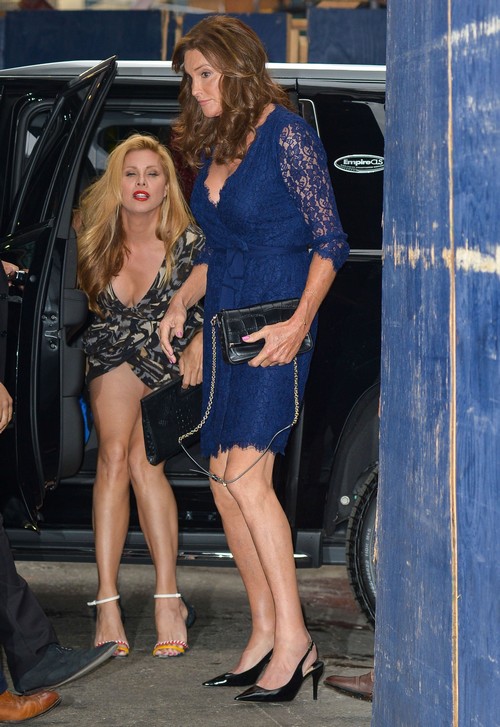 Caitlyn Jenner and Candice Cayne spent a hot and seemingly romantic night with Boy George! I only have eyes for you, was the aura given off at the Boy George Concert at the Greek Theatre in LA on July 24 between Caitlyn Jenner 65, and very close friend Candice Cayne 44. The two danced the night away and were very touchy-feely throughout the night as they danced. Seems as though they were so smitten with each other, that they were the only ones in the packed room dancing and Caitlyn Jenner only had eyes for Candice. Caitlyn’s arm at one point was around the waist of the blonde bombshell as they laughed and seemed very enamored with each other as they twirled around.

Before Boy George took his spot center stage, Caitlyn took to the stage to introduce the band and received a standing ovation and admitted “so much fun,” getting the crowd riled up. “Thank you very much! “Caitlyn Jenner in the house for her first Boy George concert!” The ‘I am Cait’ star said. “This is going to be a good group. Thank you so much. Enough about me, Thank you for being here tonight. This is so much fun for me and let’s hears it here at the Greek Theatre for Boy George!”

Boy George supported Caitlyn Jenner following her transition, and was thrilled how the fans welcomed her. Caitlyn and Candice Cayne have gotten very close in the last few weeks, Candice is a regular on Caitlyn’s documentary ‘I am Cait.’ Caitlyn is very smitten with her and they work very well together.

Caitlyn Jenner arrived in a black party bus and walked in with other women and a couple of camera men. They had champagne and a stack of red Solo cups. The ‘I am Cait’ star looked very happy. People were happy to see her even giving each other high-fives, saying I saw Caitlyn Jenner.

Do you think Caitlyn and Candice are just friends or dating and more? Candice is currently single and supposedly only interested in men, while Caitlyn is a woman. Candice has been a huge mentor to Caitlyn, and supported her as she accepted the Arthur Ashe Courage Award at the 2015 ESPYs on July 15. Do you think Caitlyn has a chance knowing Candice only is interested in men?