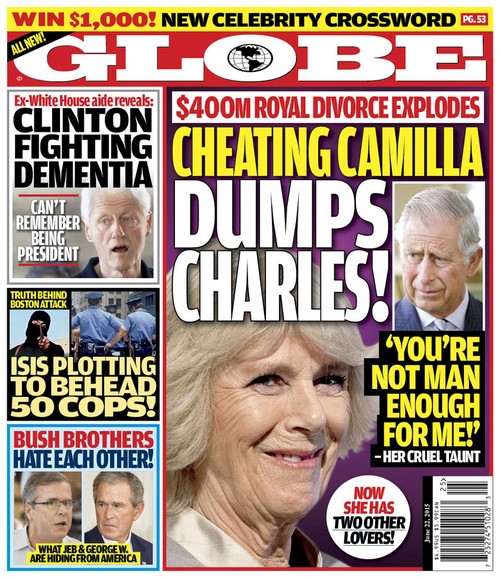 The June 22 cover of GLOBE Magazine features a photo of Camilla and Charles, the shocking heading reads: “$400 Million Divorce: Cheating Camilla Dumps Charles!” The GLOBE cover goes on to reveal that Camilla informed Charles he was “Not man enough for her,” and now she is not only cheating on him with a British TV star – but she has TWO lovers on the side.

Camilla Parker-Bowles will never file for divorce, despite how Charles “isn’t man enough for her,” just because of the simple fact that she wants to be the next Queen of England. But, Prince Charles has apparently had enough of her affairs. And, if he hasn’t his mother Queen Elizabeth surely has – the last thing she wants is more scandal surrounding her family. Whether it is Prince Charles or Queen Elizabeth, someone will probably be having Camilla served with divorce papers ASAP.

GLOBE Magazine always has the inside scoop on the Royal Family, and just last week they revealed that Prince William and Kate Middleton had banned Camilla Parker-Bowles from visiting his children Prince George and Princess Charlotte, because she was publicly embarrassing their family and cheating on his father. It’s safe to say that Camilla Parker-Bowles could be cut off entirely from all of the royal family, after her latest alleged escapades.

Do you think that Camilla Parker-Bowles will clean out the royal family in the event of a divorce? Is there any chance Queen Elizabeth will let her remain married to Charles and become Queen herself down the road? Let us know what you think in the comments below and don’t forget to come back to CDL as we will pick up this week’s issue of GLOBE as soon as it hits the newsstands and report more details on this fascinating story.