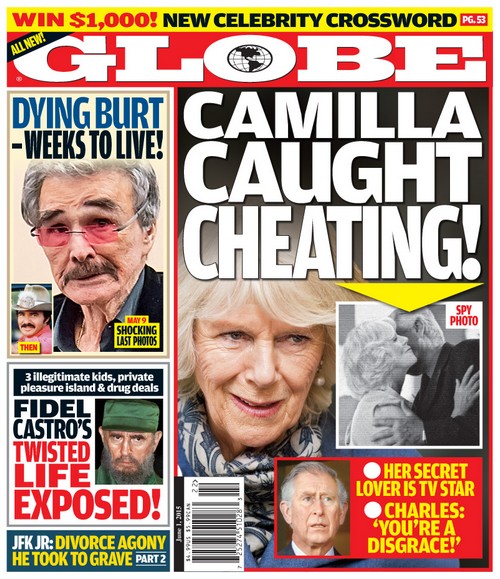 The June 1 edition of GLOBE Magazine reveals that Camilla Parker-Bowles has been cheating on Prince Charles with her celebrity boyfriend since 2011! Although GLOBE doesn’t disclose her boyfriend’s name, they do reveal, “The Duchess of Cornwall first met the actor, who works regularly on British TV, the stage, and has landed minor roles in film, at a cocktail party in 2011 – with Charles!”

Apparently, Camilla’s super secret affair, isn’t much of a secret now that she got caught kissing her boyfriend on camera – and her husband Prince Charles is not happy about it! According to GLOBE Magazine’s inside sources, Camilla and Charles got in a huge fight over her affair – and it’s safe to say Camilla came out on top. Not only did she remind Charles that he was being a hypocrite, and they were both married to other people when they began their affair, but she basically double dared him to divorce her if he didn’t like it.

GLOBE’s insiders reveal that during Camilla and Charles major blow-up fight over her affair, Camilla screamed at Charles “If you don’t like it, divorce me! It will cost you $350 Million.” It’s safe to say that if Prince Charles wanted to spend $350 Million on a divorce – he and Camilla would have been over years ago. The Duchess seems to know that Charles has no intention of following through on his threats to end their marriage – so she is basically free to do what she wants.

Who do you think Camilla’s mystery boyfriend is? Does the Queen know about the affair – will she force Prince Charles to divorce Camilla? Do you think Prince Charles could be cheating on Camilla Parker-Bowles too, and he just hasn’t gotten caught yet? Let us know what you think in the comments below!