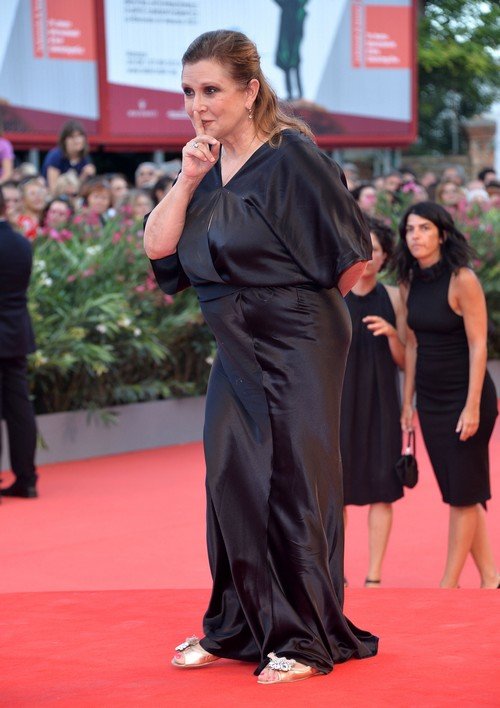 Carrie Fisher recently spoke out about requests for the iconic actress to lose weight before starring in the highly anticipated “Star Wars: The Force Awakens.” In a recent interview with Good Housekeeping U.K., Fisher talked about rejoining the “Star Wars” franchise for the first time in three decades.

Fisher was frank when she said she was pressured into losing 35 pounds to play the role of Leia. They don’t want to hire all of me – only about three-quarters!” Carrie Fisher said.

“I’m in a business where the only thing that matters is weight and appearance.That is so messed up. They might as well say get younger, because that’s how easy it is.'”

“Carrie went on to talk about how she lost the weight in order to play the role of a princess turned general for the newest “Star Wars” release due out on December 18.

Fisher quipped that she loses weight the “same way everybody has to — don’t eat and exercise more!”

Carrie elaborated on the weight loss process, saying “I have a harder time eating properly than I do exercising. It’s easier for me to add an activity than to deny myself something. When I do lose the weight I don’t like that it makes me feel good about myself. It’s not who I am. My problem is they talk to me like an actress but I hear them like a writer.”

Carrie Fisher has always been known to speak her mind and she didn’t hold back in the Good Housekeeping interview either. Fisher is quick to point out that she lost weight for the “Star Wars” role and not because she really wanted to.

Carrie even admitted that she really doesn’t like that losing weight makes her feel better about herself because it makes it hard to stay bitter about the weight loss request in the first place.

Fisher has battled her weight in the past and even acted as a Jenny Craig spokesperson at one time. She is a harsh critic of Hollywood’s insistence on everything being about image and looks.

Carrie made it clear that she’s not really a fan of people gushing over the way she looks or pointing out the fact that she lost weight because it shouldn’t be more important than just being happy.

Carrie Fisher has made some very valid points about the image-driven shallowness of Hollywood, but she also succumbed to it by losing about 35 pounds for the LucasFilms production.

As for making enemies for being too outspoken, Carrie is probably going to be okay because it’s not the first time she has voiced her opinion on Hollywood’s obsession with beauty.