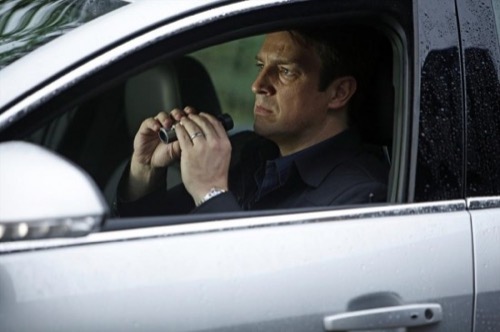 Tonight on ABC Castle starring Nathan Fillion continues with an all new Monday February 2, season 7 episode 13 called “I, Witness” and we have your weekly recap below. On tonight’s episode, a suspicious wife hires Castle [Nathan Fillion] to see if her husband is being unfaithful, and the case turns deadly when Castle witnesses his client get killed. Beckett [Stana Katic] and Castle then investigate the homicide, however, they have no real evidence of the murder.

On the last episode, when a young Latin telenovela actress was murdered, Beckett and the team delved into a case that was as flamboyant and full of intrigue as any telenovela. Meanwhile, Castle was hired as private investigator by the show’s sultry star to pursue the case from another angle. Did you watch the last episode? If you missed it, we have a full and detailed recap right here for you.

On tonight’s episode as per ABC’s synopsis, “Castle is hired to uncover if a client’s husband is having an affair, but the case takes a shocking turn when Castle witnesses the client’s murder – by her husband. But with no proof that the killing took place.”

Tonight’s episode of Castle begins in a dark wooded area, Castle is wandering around with a flashlight – suddenly someone comes out of nowhere and hits him over the head and knocks him out.

Flashback – 12 hours earlier. Castle finds Kate in his home office, she says that she is going to work from home with him and is just doing some paperwork. Castle receives a phone call from the office – he tells her that he has to go to his private investigator office and he has a potential client. Kate gushes that it is great that he has work.

Castle arrives at the office – to meet his new client Eva Whitfield, she introduces herself and says that she actually went to high-school with him. Eva sits down with Castle and explains that her husband Cole is a stockbroker and she thinks that he is cheating on her. Castle explains that he doesn’t really feel comfortable taking on cases like this – but she pleads with him.

Castle gets to work and begins stalking Cole, he heads to a restaurant and listens in on Cole’s meeting with his co-workers Scott and Robert. He informs them there is no way that they are selling the company. His friends leave and then Cole makes a mysterious phone call – he tells the person on the other line that he is coming to see her. His mission is successful – he is able to snap pictures of Eva’s husband having sex with another woman. Castle calls Kate and tells him about the case, he says that he just has to drop the pictures off to Eva and then he will be home for dinner.

Castle arrives at Eva’s mansion to drop off the photographs. He hears her screaming from outside the gate and rushes to the window just in time to see someone dragging her body down the stairs and outback in to a car. The car speeds off and Castle jumps in his car and follows them. He tries to call Kate, but he has no service. He arrives at a pull-off on the side of the road where the car is parked, the man driving and Eva’s body are already gone. He heads in to the woods to look for them, and is hit over the head and knocked unconscious.

Castle wakes up in the woods, and finds his flashlight lying on the ground next to him. He runs to the road, and realizes that his car and the other car are both gone. He has no cell phone service and begins walking down the road in the dark until he has service. As soon as his phone has a signal he calls Kate and begins rambling that Eva is dead.

The police arrive, and Castle explains what he saw. The detective on duty are skeptical that Castle is telling the truth. They all head to Eva’s house and her husband Cole answers the door – he says that Eva isn’t home, and he just got home twenty minutes ago. Cole produces a note from his wife, and says that Eva left him because he was cheating on her. They head to the kitchen, and they find a tiny drop of blood on the floor. Cole insists that Eva cut her hand on a jar a few days ago. He can tell that they are accusing him of doing something to Eva and he orders them to get out of his house immediately.

The next morning Kate wakes up and finds Castle still hasn’t slept. He blames himself for not saving Eva, Kate explains that they still haven’t found Eva’s body or her car. They checked out Cole’s alibi, and he wasn’t at work. But, he says he was at his mistress Taylor’s house until 8:00 PM. Kate says she will talk to the mistress, but Castle has to stay home.

Kate sits down with Taylor, she thinks that Eva ran off and reassures Kate that she will be back. Taylor explains that she met Cole in her yoga class, and they have been sleeping together for a year, she insists that Cole was with her until 8:00 PM last night. Kate isn’t buying her story, so she sends Espinosa to the apartment building to see if anyone else saw Cole there. Meanwhile, Castle is sitting outside of Cole’s house and spying on him. Cole catches him, and says that Castle is insane. Cole says Eva called him twenty minutes ago and she cleaned out their bank account and stole 7 Million dollars from him. Cole sneers to Castle that he “can’t prove anything” before he storms off.

They do some digging on Cole and learn that he was married before to a woman named Mallory. She died in a suspicious hiking accident while she was with Cole, and he inherited her entire estate – which was several million dollars. The cops tried to pin the murder on him, but it wouldn’t stick – because he had an explanation for everything. Kate and Castle are certain now that he killed Eva, because he got away with murder once, and thought that he could do it again. Esposito reveals that someone really called Cole from Eva’s phone, just like he said. They trace the call and realize it was made from a tower near his mistress Taylor’s house.

Kate calls Taylor back in for questioning, she insists that Eva isn’t dead and she was at work at 9:30 AM – 11:00 AM when Cole received the phone call, so she couldn’t have made it. Before she says anything else a woman barges in to the room and announces that she is Taylor’s lawyer and Cole sent her. Kate calls the yoga studio and confirms that Taylor was at yoga class, and someone set her up.

Castle has an epiphany – he realizes that Eva probably isn’t dead. He thinks that Eva staged her own murder, and called him to the house to drop off photos to be the witness. Kate receives a phone call while Castle is ranting about Eva being alive, and informs him that he is wrong. They just found Eva’s body in the Hudson River. Castle and Beckett head to the morgue and it is really Eva’s body, they confirmed her fingerprints and her dental records. They corner Cole’s mistress again – and when Taylor learns that Eva is dead, she confesses that she lied and Cole wasn’t with her the night before.

The coroner calls Kate and says that she found pieces of Cole’s hair underneath Eva’s fingernails. Kate gets a warrant for his arrest and the cops race to Cole’s mansion to arrest him. They arrive and find him hanging from the stair case, he appears to have committed suicide.

Kate heads home and breaks the news to Castle, she apologizes to him and says that she is sorry – because she knows that he really wanted to see Cole pay for his crime. The next morning Kate wakes up and Castle is gone, she heads to his office and finds that Castle has been up all night and put together an entire timeline – he thinks that Cole was murdered. Castle thinks that Cole’s co-owner of his firm, Scott, killed Cole so that he could have control of the company and sell it. Castle thinks that Eva and Scott were co-conspirators, and then Scott turned on Eva and killed her too.

Kate heads to the office and sends Esposito to check in on Scott’s alibi. Later Castle calls Kate to apologize for getting crazy and admits he may be going a bit overboard. Kate says that Scott didn’t kill Eva – but she knows who did, and it wasn’t Cole. They did some research on Cole’s co-workers and learned that Cole was having an affair with his colleague Richard’s wife.

They bring Richard in for questioning, and he insists he was at the office the night that Eva was killed. Unfortunately, they have proof that he was lying – they have photos of him en route to Eva’s house. Robert confesses that he and Eva were working together to stage her murder and he talked to her the next morning on the phone. He insists he had nothing to do with Eva’s murder, he helped her clean up her house and then gave her a key to a corporate apartment.

They head to the corporate apartment to check out Robert’s story – and find Eva’s fingerprints there, so he was telling the truth. Kate and Castle do some digging and learn that Cole’s first wife Mallory was actually his lawyer’s sorority sister. They know that Eva was in contact with the lawyer after her “death.” They accuse Cole’s lawyer of killing Eva and Cole to get revenge – they found both of Eva and Cole’s blood and DNA in the trunk of her car. Cole’s lawyer is arrested for the murder of him, and his wife Eva and carted away in handcuffs.