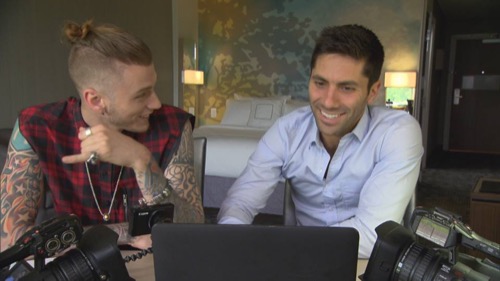 Tonight on MTV their series about online dating, CATFISH airs with an all new Wednesday August 19 season 4 episode 17 called “Hundra & Emily.” On tonight’s episode a woman to seek assurance that her online love is real.

On the last episode a woman seek help with her online romance after learning that the other party lied about her identity. Did you watch the last episode? If you missed it we have a full and detailed recap right here for you.

On tonight’s episode per the MTV synopsis “an unexpected same-sex romance spurs a woman to seek assurance that her online love is real.”

#Catfish tonight has Machine Gun Kelly as a guest co-host. Hundra writes that she met a girl online named Emily and says she’s her first GF and makes her feel like herself. Hundra says she thinks that Emily is playing a game and hasn’t met her. She says she even drove to her place one day and she says she left. Hundra says it’s risky asking for their help and says her family is from Haiti and they are very strict and homosexuality is not tolerated. She says her family could disown her. She asks for help.

Kells says this girl Emily is on his nerves already. They video chat with Hundra and Nev says Max isn’t there and introduces Machine Gun Kelly. Nev says she’s very brave to come out this way. Hundra says she’s nervous and says she’s the only girl she’s felt this way about but says Haitian kids are not supposed to be gay and it’s not tolerated. She says she’s been in relationships with men before but always got her heart broken. She says she contacted Emily when she was feeling gay for a day.

She says Emily gave her her phone number and opened up to her about how hard it was to come out. Kells asks if she has to be what she looks like. Nev asks about them meeting up and Hundra says she drove to see her as a surprise and she said she was on family vacation then another time she said she had car trouble and she sent her some money. Kells asks why she’s still texting her when she’s spinning her around. Max says this girl may or may not be who she says she is.

Nev says they can come meet and talk to her. They head to Hundra’s house and she says she’s nervous and says her culture looks down on homosexuality as disrespecting your culture. She says she asked Emily to tell her the truth because this is a big deal to her. Hundra says she sent the money via Western Union and it was to a different number and an address in Brooklyn. She says she has had a bunch of different phone numbers since they’ve been texting. She has just three photos of her.

Kells says he doesn’t like this and Hundra says Emily deactivated her Facebook page. She shows some photos and Kells says Hundra seems smart but Emily is getting past that somehow. Hundra says she wants to know who she’s been talking to since she has helped her get to know herself. Max says they’re going to go do some research. They head out. They talk and wonder if Emily might be in Philadelphia and not in New York like she said.

Nev and Jells talk about the facts of the case and then Hundra sends them all her phone numbers she has for Emily. They start searching with the current phone number. They find someone in Philly named Geralyn. It’s a whitish chick and they see a photo of her making out with a girl who looks like Emily. They then find “Emily” whose real name is Melanie. They wonder why Geralyn would use Melanie’s photos and if they’re running a scam on Hundra.

They head back to Hundra’s house. They tell her about Geralyn and Melanie. Hundra gets upset and excuses herself – she’s crying. She comes back down and says they can keep going. She says she’s not attracted to girls that dress like men like Geralyn does. She says she wants to know who Emily is. Nev says they can reach out to Melanie. They send her a message online then make plans to meet in the morning to talk.

Nev says they can still reach out to Geralyn. Melanie calls Nev back and they tell her about Emily using her photos. They ask to meet up with her and she says she can meet them tomorrow. Kells says the plot thickens. Nev calls Hundra and says they’re meeting Melanie tomorrow. Next day, they wait on Melanie. They introduce her to Hundra. Nev tells her the story about the Emily profile. Nev says they’ve been looking into it and Melanie says to lay it on her.

They ask her about Geralyn and she says that’s her ex. She says she and Geralyn broke up because she still had feelings for her ex. She says Geralyn took it pretty well. Then they tell her the number that has been texting with her is Geralyn. Melanie says she thinks Geralyn played with her heart. Nev says they have to figure out what to do since it looks like Geralyn is the person. Melanie calls her for them. She answers and tells her that she’s with Catfish.

She says she’s with Hundra and asks if she knows her. Geralyn laughs and says she can’t talk about it over the phone. Melanie asks her to meet Hundra and she finally says yes. Melanie says she doesn’t know what that means for her friendship. Nev asks for Geralyn’s address. She and Melanie says goodbye and they roll to Geralyn’s. Hundra wonders why Geralyn dragged her into this drama.

Nev says it must have sucked when Melanie dumped her. Hundra says she thought gay girls liked to convert straight girls. Nev says she’s making an assumption about her. Hundra says she told her she loved her and Emily said it back and now it’s this. She says she’s not who she showed her. Geralyn says she’s not a fem. They ask how she feels about Hundra. Nev says to be honest now. Geralyn says she was being spiteful but then started to like her and didn’t want to lose her.

Geralyn says she’s been real with her despite the pictures. Hundra asks where her money is and Geralyn says she never picked it up and just wanted to see if she would be there for her. Kells says Geralyn liked her and it’s not a deep crazy scheme. Nev says maybe this needs to marinate and they’ll talk tomorrow. They head out. Hundra says she went looking for a lipstick lesbian and got a butch d-ke. Kells tells her that’s harsh and she’s ignorant.

She says Hundra knew Melanie and knows this is all fake. She and Melanie are exes and says she doesn’t know how this all came about. Nev asks why she did this and she says she loves Melanie and did what she asked. Kells asks if Hundra is a lesbian and Geralyn says she doesn’t know and doesn’t like the way Hundra was making her look on TV. Nev asks why they’re there and Kells asks if Hundra knows they’re talking to her.

Kells says to go get Hundra and the producer says to call Melanie and Hundra to bring them over. Kells is furious. He curses and says he’s not there to help these little girls get 15 seconds of fame. Nev says only Melanie could manipulate Geralyn into doing something. Geralyn tells the producer she did this for love because Melanie asked. Nev pulls of his mic and Kells says he has the hairiest chest he’s ever seen. Nev says it’s his calling card.

Melanie shows up alone then Hundra shows up. Geralyn comes out. Nev asks what’s up and Melanie goes off on Geralyn about stealing photos and talking to people online. Geralyn says it’s over and says the while thing is over. Melanie plays dumb and Kells says Geralyn told them that they’re playing them. Hundra says it was something that needed to be done. Nev asks if she just wanted to come out and she says she wanted the world to know. Nev asks why the world needs to know.

Nev asks why Melanie didn’t help her without making her ex Geralyn look like an asshole and they tell her what Hundra was saying about Geralyn. Nev tells them they put themselves in a shit situation for the whole world to see. Geralyn says this sucks and Melanie apologizes. Nev wishes them luck and Kells tells Nev that Hundra was the mastermind of all of this and they agree they don’t know what to think.

Nev says he’s trying to process this and says it’s upsetting and he doesn’t like being made to look like a fool. He wonders what’s up with Hundra and she texts him to say she’s there and wants to talk to just him. He goes outside to talk to her. She says she’s not doing well and wants to talk to him. Nev says things got crazy yesterday. Hundra says she won’t apologize and she says she wanted her coming out to be “rememorable” for her and Nev says her family will just see her lying on TV.

Nev says there were other things she could have tried and Hundra says there were and she did. Nev says her coming out will be dwarfed by all this craziness. Nev says he encourages her to talk to her family before the show airs so they’re not blindsided. He wishes her luck and walks away. Two months later, Nev calls Kells who is on tour. He loops him in on the call to Geralyn and Melanie is there with her. They tell them they learned their lesson.

Melanie says she hasn’t talked to Hundra and she vanished. Melanie says they just wanted to help her. They tell Nev they’re just friends now and they both apologize some more. Then they call Hundra and she says she’s been talking to girls and she’s been out on some dates. Nev asks how she feels about this and Hundra says she’s not happy about the way she went about it. She says it wasn’t necessarily wasted time and says they still got something out of it.

She tells Kells he still got to be on TV and he gets mad and says – don’t even. Nev says she lied and disrespected her community. Hundra says she won’t regret it and says she can’t take it back. They hang up on her and Nev says she hasn’t changed much. Kells says no comment – he’s still annoyed.