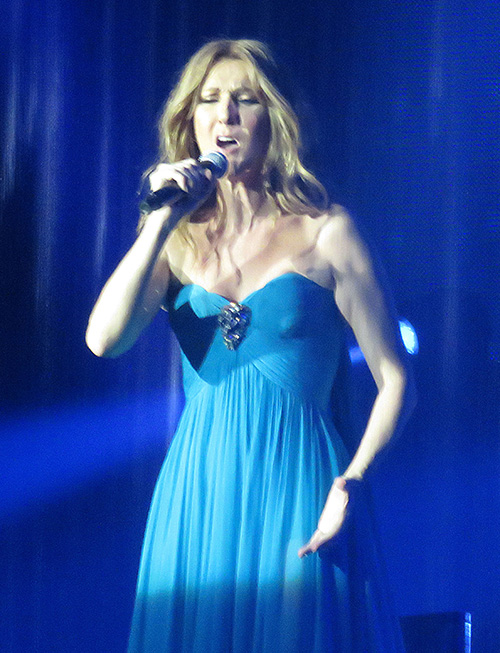 Celine Dion’s husband Rene Angelil has been fighting a long and brutal battle with throat cancer. The singer has confirmed that her husband Rene’s battle is coming to an end – and it is unknown how many days he has left with her. Earlier this year, Celine cancelled all of her shows so that she could stay at his bedside, however Rene convinced his wife to get back to doing what she loved – singing on stage. Celine and Rene headed back to their home in Las Vegas so that she could get back to work at her residency at Caesar’s Palace. While Celine is performing, Rene is at home getting the best around the clock care that money can buy.

According to this week’s edition of National Enquirer, fans at one of Celine Dion’s recent shows got to see a rare glimpse of her ill husband via live feeds. Apparently, Celine has changed her entire show around – and dedicated it to her husband. Rene was originally supposed to come to the show and make an appearance on stage, but his medical team decided he was too weak and it wasn’t feasible with his feeding tubes, so they showed a live video streaming from Celine’s home on stage – and it featured her husband Rene smiling and waving.

A source that works behind the scenes at Celine’s Vegas residency dished to National Enquirer, “She has changed most of the songs in the set. Her husband is really really sick, so it is amazing that she is still performing. You can really tell that there is a lot of passion going into each performance. During her sets she speaks to the crowd and thanks them for their support.”

We’re not sure we would be able to sit through one of Celine’s shows without crying our eyes out. She has caught some flack online about returning to work while her husband is on his deathbed – but it seems to be what Rene wants. And how could you deny a dying man his last wish? Do you think you would be able to perform right now if you were Celine Dion? Let us know what you think in the comments below!