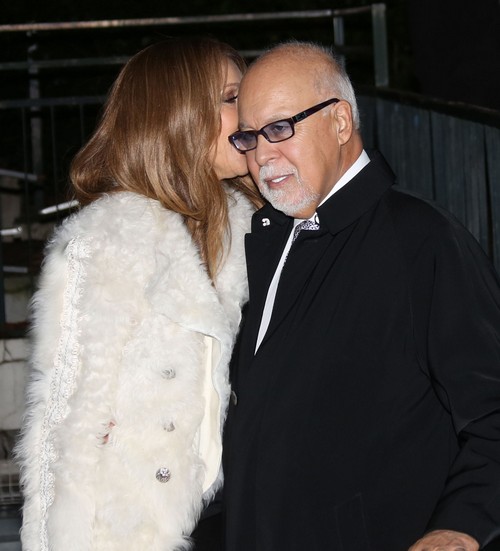 Celine Dion’s husband Rene Angelil has been fighting a losing battle against throat cancer for months now – and reports say that the 73 year old is in his final days. Recently, Celine Dion returned to work and began doing shows four nights a week in Las Vegas at The Colosseum Theater at Caesar’s Palace – and it raised a few eyebrows. But, according to the Closer – Celine was just fulfilling her husband’s dying wish.

Since Celine returned to work, she has dedicated her shows to her dying husband Rene Angelil. And, in September Rene even joined her show via satellite video to say “hello” to Celine Dion’s fans. Sadly, the video chat will probably be the last photos and videos ever taken of Celine’s dying husband. A source close to the couple explained to the magazine that Celine returning to work was not her decision – she did it to please her sick husband.

The insider dished to Closer, “If she had her way, she would not be performing, but René insisted. He believed that it was best to get Céline back to doing what she loves, and set the stage for the time when he is no longer here. I think René feared that Céline would hesitate to get back onstage after his passing.”

Closer went on to say that every second that Celine Dion isn’t performing at Caesar’s Palace – she devoted to Rene. She and his nurses take him for walks at their home, or on days that he doesn’t feel up to it – she lies in bed with him and watches old movies. Of course, when she isn’t playing nurse to her cancer stricken husband or performing on stage, the singer is taking care of her and Rene’s three children.

Do you think that if you were in Celine’s position you would be able to go back to work – even if it was your husband’s dying wish? Let us know what you think in the comments below!