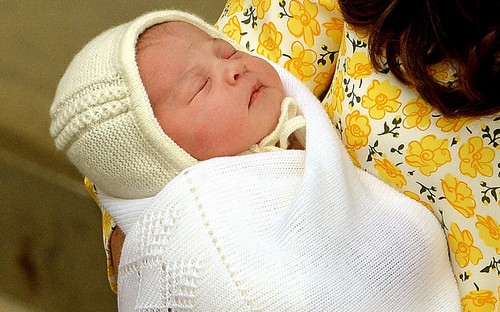 The world waited with bated breath for the Duchess of Cambridge to deliver her second child, and now Kate Middleton finally gave birth to a baby girl. A baby name frenzy followed, and everyone wanted to know what Prince William and Kate’s named their baby, and Kensington Palace has finally confirmed Kate Middleton and Prince William have named their baby Charlotte Elizabeth Diana! Her Royal Highness, Princess Charlotte of Cambridge has a name!

Some speculation claimed the royal couple wanted to take baby Charlotte to see the Queen before the name was announced due to etiquette. The telegraph notes that royal protocol is debatable, but the Duke and Duchess reportedly wanted to travel to Norfolk with Prince George and their new Princess today. There, William, Kate, and new big brother George introduced the royal baby girl to her great-grandma, Queen Elizabeth.

Sources are slowly leaking information regarding all the details of Kate Middleton’s birth. According Us Weekly’s insider, Kate gave birth naturally. The Duchess opted for a natural birth when delivering Prince George in 2013, so it’s not a big surprise Princess Kate didn’t use an epidural during her second delivery.

William and Kate stepped out to present Charlotte Elizabeth Diana to the world around 10 hours after the complications-free birth. The royal couple then left the hospital just 12 hours after the Charlotte was born. A small team of midwives are monitoring Kate and the new baby girl, as they rest at Kensington Palace.

Of course, the Middleton family was one of the first to meet the baby Princess. Carole and Pippa Middleton were seen leaving Kensington Palace looking very happy and excited. What do you think of Kate Middleton and Prince William’s baby girl name, Charlotte Elizabeth Diana?