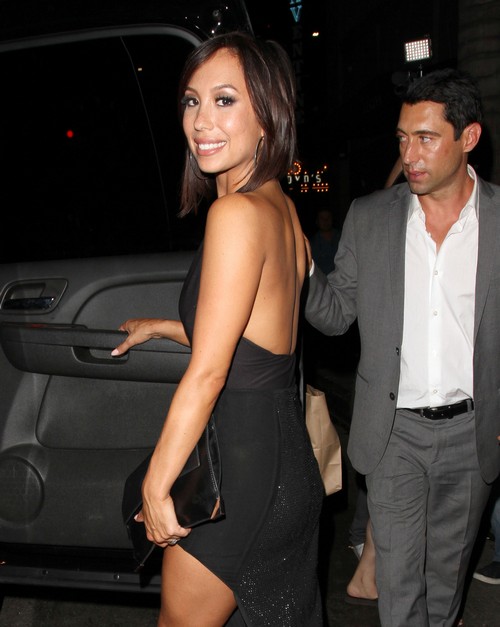 GLOBE is reporting that not only has Cheryl Burke quit ABC’s DWTS but the dancer is moving over to a competing dancing reality show on NBC! Dancing With The Stars spoilers for the 2015 season tease some major cast and judge shake-ups, and pro-dancer and fan favorite Cheryl Burke has confirmed that she will not be returning to the ABC dancing competition. Cheryl Burke has been a key component of DWTS since she signed on to the television show for their 2nd season, after the 19 season aired Cheryl revealed on social media that it was the last season she would be on Dancing With The Stars – and she had decided to move on and pursue other projects.

So, what other projects is DWTS pro-dancer Cheryl Burke working on? Well, a new and improved dancing competition that will air on ABC’s rival network NBC – and has Dancing With The Stars executives shaking in their boots. According to the January 19th edition of GLOBE Magazine, “The as-yet untitled weekly show, which will debut later this year, promises a competitive element and will involve several other celebrities battling it out in a contest that could provide competition for Dancing With The Stars.” NBC’s new dancing show may not have a name yet – but it already has tongues wagging and questioning whether it will steal DWTS’s thunder.

Dancing With The Stars has seen better years, although Season 19 of the ABC show finally saw an improvement in ratings – the show has steadily lost its “wow factor” over the years. TPTB at Dancing With The Stars do have reason to be concerned, although they have legions of loyal viewers that tune in every season – the younger crowds could be intrigued by the new change of pace dancing competition at NBC.
While no one from Dancing With The Stars has actually publicly slammed Cheryl Burke for jumping ship and signing on to NBC’s new dancing show – rumor has it that her fellow pro-dancers and the DWTS judges are not impressed with her questionable loyalty. After 17 season on a show, Cheryl’s co-stars are shocked at how quickly she jumped at a chance to join a rival show that could potentially put them out of business.

So, will you be tuning in to NBC’s new celebrity dancing show? Do you think that Cheryl Burke was wrong to sign on to the show? Let us know what you think in the comments below and don’t forget to check CDL for all of your Dancing With The Stars spoilers and news.