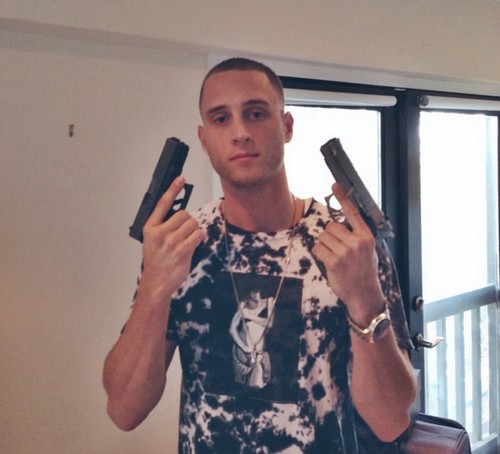 Chet Hanks, an aspiring rapper, has a history of substance abuse problems and was recently partying as the guest of honor at a London club when things took a turn for the worse. A source spoke to Mirror and said, “He was pretty obnoxious once he started drinking at the club. He kept saying ‘do you really know who I am?’ Nobody was a ll that impressed and that was clearly annoying him. Nobody recognized him.”

Well, this did not make Chet happy, and he was seen getting visibly annoyed that people were not impressed, and that less people recognized him. Sorry, but we wouldn’t recognize Chet Hanks if we saw him either. Some people need to really get over themselves.

After Chet left the club, things only got worse. The source says, “He then went back to the hotel with a British actor friend and three female promoters. He was sick in the car park and then went up to the room and got really loud. He asked the girls if they would join him in the bed, but they are not like that so he started making a noise. He saw some sprinkled make-up called banana powder and started asking ‘who’s got the coke?’ But nobody did drugs there.”

At this point, Chet Hanks was making enough noise to disturb the other guests at the hotel. Some of the pilots complained to the hotel, and the employees tried to calm Chet. “All you could hear was this smashing and crashing. Next morning he was gone but the room was trashed. Everything was smashed and there was glass all over the floor,” says the source.

The police estimated the damage to caused by Chet Hanks to total !,200 GPB. They released the following statement; “We have been given the name of the suspect, a 24-year-old man from the USA. We are working with other agencies to try to trace him so he can be interviewed.”

Chet Hanks seems to be going down a bad path and if things do not get better soon, all hope will be lost for the son of Tom Hanks and Rita Wilson.