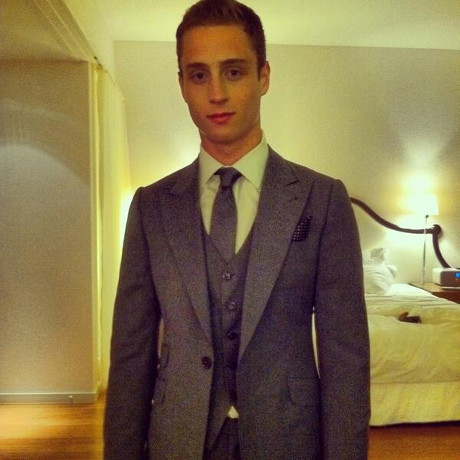 Tom Hanks‘ son, Chester Hanks AKA Chet Haze (that’s his rap superstar name), got in a long-winded Twitter battle with Jensen Karp, formerly known as Hot Karl. On December 1st, Jensen replied to one of Chet’s tweets (which said he was going to go “bless a mike with spoken word”) with a pithy statement that, needless to say, Chet didn’t react to favorably.

“Your dad was in Castaway,” Karp said in a retweet, to which Chet promptly replied: “so cuz my Dads famous, I can’t do what I want to do in my life? Nah, that’s just what YOU wouldn’t do… Cuz you’re basic.” That received a reply back from Karp: “I would reflect my upbringing correctly, not pretend I was raised like Mobb Deep, dude. You visited the set of Turner & Hooch.”

The conversation, or rather hate-fest, dragged on and on, with Karp basically calling Chet out on his privilege and his proclivity to be a douchebag and Chet lambasting Karp for his supposed “jealousy.”

After Chet fired back with things like “I don’t know who you are but u can do yourself a favor and stay the f— outta my timeline!” and and “Ill just be nothing, do nothing, and offend nobody. That way id be jus like YOUR irrelevant ass,” Karp launched another grenade onto Chet’s timeline.

“U went to private school & talk like you’re French Montana. Even saying “swagger” should be illegal for a kid raised in Brentwood. Chet, your father is Tom Hanks. America’s sweetheart. And you’re talking about smoking kush and banging dime pieces. It’s acting. I am actually not hating, I’m trying to help. No one wants to hear the fake black accent from a kid who knows the Speilbergs.”

And if you think Chet didn’t have a response, well, you’re sorely mistaken. Chet has feelings. So many feelings. And he let them all pour out over the course of many Tweets: “My whole life I been getting s— from jealous nerds like you simply because I love Rap. It’s f—ing hilarious. My passion has nothing to do with your petty existence, so don’t f—in get them twisted. Difference between me and these clowns is I actually will beat your ass if I see u in person whereas y’all are all #soft. Y’all just use the same jokes over and over again. Forrest Gump, Capt Phillips ha ha ha. Say something original at least. I’m outta here doe. Just wanted to keep it real on these twitter nerds for once… “

Jensen replied with, “Your dad is Capt Phillips.”

The situation went on for a while, eventually resulting in Chet challenging Jensen to a rap battle — and Jensen said sure, but can Ron Howard be the judge? So far, a date has not been set for this Rap Battle of the Century, but I actually hope it happens because when two ridiculous forces clash . . . internet magic’s born.