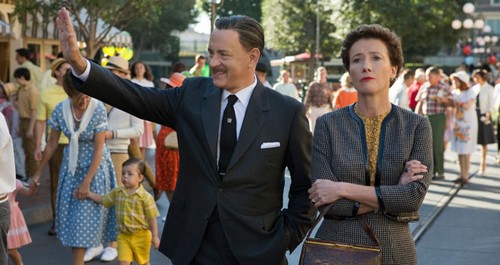 Apart from American Hustle and Monuments Men, most of the major awards season contenders have been seen by now, including Saving Mr. Banks. The film premiered at the BFI Film Festival in London to strong reviews, although some criticized the film for being too ‘self-congratulatory‘. As a film about the making of Mary Poppins, it’s hard to imagine Disney making a film that’s not ‘self-congratulatory’.

I suppose these types of criticisms are always inevitable whenever Hollywood makes a film about Hollywood, something which it’s won’t to do quite often. I mean, just look at last year’s Oscar winner, Argo – a prime example of a Hollywood self-congratulatory movie if there ever was one.

The performances by Tom Hanks as Walt Disney and Emma Thompson as P.L. Travers [author of the beloved tale Mary Poppins] are being universally praised, and being hailed as guaranteed Oscar nominees, especially Emma’s prickly and emotionally distant Travers.

A review from the Film Experience stated, “As you might expect, the heart of the film lies in the relationship between Walt and Mrs Travers. Just as Thompson is wonderfully poised and dismissive, doing an expert Hollywood job of dismantling Travers’ guarded barbs as her memories seep in and soften her up, Hanks might be even better as Disney. He uses his movie star charisma to portray Walt’s immense popularity, but does so without sacrificing the shades of manipulation to his dealings with Travers.”

However, a negative review from the Guardian called the film, ‘outrageously sentimental and self-congratulatory.‘ Many reviewers have been quick to point out that director John Lee Hancock [who previously directed The Blind Side] has taken out all the subtlety in the script, written by Kelly Marcel. They’ve stated that the script is nuanced and a careful character study, whereas the film seems a lot broader and ‘on the nose‘.

Despite these criticism, the film will likely be one of the ten Best Picture nominees come March at the Oscars. It’s got too much nostalgia, is about one of the most famous movies in Hollywood history, and features two stellar performances from Academy favorites, Hanks and Thompson. It’s hard to imagine the film not being rewarded with nominations, even if it doesn’t win anything.