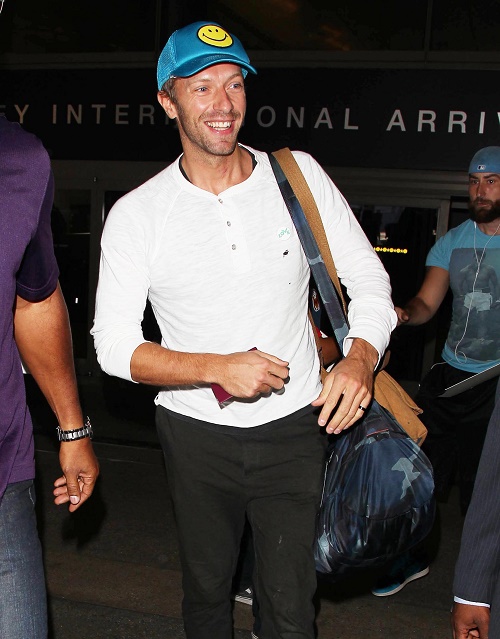 Is Chris Martin cheating on Jennifer Lawrence? Chris was photographed at 1:30 in the morning in London taking a romantic stroll arm-in-arm with a woman, and it wasn’t Jennifer Lawrence! The lady on Chris Martin’s arm during the wee hours of the morning was none other than singer Kylie Minogue. Either Chris Martin has some serious explaining to do, or he and his Hunger Games girlfriend managed to break up without any of us noticing.

A report from TMZ reveals, “Chris Martin was arm-in-arm with Kylie Minogue at 1:30 AM in a London park, which may or may not be news to his girlfriend of several months. Chris and Kylie were strolling together early Monday morning after her concert in Hyde Park – and the late/early hour has some people thinking he and Jennifer Lawrence are dunzo.” The photos from TMZ show Chris and Kylie looking very cozy together, and have caused some serious speculation as to the status of Chris’s relationship with J-Law.

Chris Martin and Jennifer Lawrence began dating when the rocker was still “consciously uncoupling” from wife Gwyneth Paltrow. However, Chris recently filed for divorce from Gwyn – reportedly so that he could move forward in his relationship with J-Law. The most recent reports on the couple teased that Jennifer was actually moving in with him! But, it looks like Chris Martin has another girlfriend in London, or else he and Jennifer Lawrence’s relationship is over. Even if it wasn’t over, it most likely is now that he was caught with Kylie Minogue.

What do you guys think, is Chris Martin a cheater? Or did he and Jennifer Lawrence quietly break up, and he has moved on with British singer Kylie Minogue? Did the musician leave the Hunger Games actress for Kylie? Let us know what you think in the comments below!