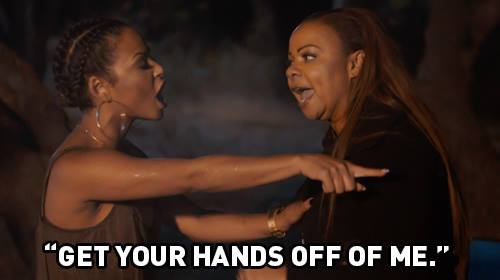 Tonight on E! Christina Milian Turned Up returns with an all new Sunday March 1, season 1 episode 6 called, “A Milian Emotions,” and we have your weekly recap below. On tonight’s show an epic family feud forces Christina to cut the camping trip she planned short. Once back in L.A

On the last episode, Christina organized a family camping trip, which seemed doomed from the start when tensions build before the group even left home. Once settled into their campsite, drinks flowed and tempers ignited as long-seeded resentments rised to the surface. Did you watch the last episode? If you missed it, we have a full and detailed recap right here for you.

On tonight’s episode as per the E! synopsis, “an epic family feud forces Christina to cut the camping trip she planned short. Once back in L.A., she continues to focus on her career. Meanwhile, Danielle’s husband Richard tries to get their marriage back on track by surprising her with a grand gesture.”

Tonight’s episode is going to be drama packed, which you won’t want to miss. So be sure to tune in for our live coverage of E!’s Christina Milian Turned Up Season 1 episode 6 — tonight at 10PM EST! While you wait for our recap, hit the comments and let us know how excited you are about the new show.

The camping trip, which is supposed to be about family bonding, has turned into a full-blown fight. Deep resentments that formed when Christina’s career first started and when she had her wedding.

Danielle says Christina is crazy if she thinks she ruined her marriage. She calls her stupid, and when she is told not to insult her, she says people are going to see Christina for the selfish bitch she is.

Christina storms off, telling them to pay their bills themselves and her mom says she pays her own bills and takes care of Christina’s child. Danielle tells Christina doesn’t get work without her mom and she doesn’t do shit for herself. Christina says their whole wellbeing has been off of her.

Her mom says that everything she has is due to her.

Christina says she loves her with all her heart, but it’s hard because she’ll never understand or appreciate her. She says in confessional she doesn’t understand why she’s called selfish when she bought her mom her dream car and a house among other things.

When her mother, Danielle and Lauren get back, Christina and Lizzy are packing everything up. It’s been a couple of days since the camping trip, and Christina calls her mother.  She is embarrassed by her actions, but she feels the family has communication problems.

Her mom says the things that came out of her mouth went beyond the fishing trip, and Christina Milian says that it was a flashback of what happened at the wedding. She says her wedding meant a lot to her, telling her not to act like it was nothing. When her mom asks if she ever found out why she was upset, she says it was about her dress, and her mom says it was the fact that Danielle saw her fiance’s mistress getting all of these privileges from him, and Christina didn’t want to hear the truth.

Christina’s mother goes into the kitchen and tells Lizzy that the family needs to go to therapy or something to talk about the wedding because Christina only remembers what happened to her, not what she said to others. Lizzy says in confessional that they are not going to see eye-to-eye until her mother sees the other side of the situation.
Christina comes in the room, and she and her mother start talking.

Lizzy goes upstairs, where Danielle has just gone to avoid the conversation. She tells Danielle she doesn’t like being pulled into the situation, but she apologizes. Christina comes up the stairs, and Danielle says this has made her realize that home is what she wants to focus on.

Danielle says her anger has been boiling on the inside from all of the incidents.

She apologizes for saying the worst possible thing to Christina that she can. Christina says she wants to be there for her and she loves her, and everyone hugs and makes up. She apologizes to both of them for all of the things she said, which she didn’t mean.

Christina is working on her songs in the studio in preparation for meeting with a label this week. She and the producers are satisfied with the song “Rebel” and hope the label agrees that it should be the first single off the album. When she brings the song to them, they agree that it is a potential hit.

Christina goes to her Persona Magazine cover party. She says in confessional that to her this is a reflection of where she is going with her music and career.

The family is going on a short trip to a villa in Palm Springs.

Christina gives everyone golfing lessons. Danielle’s husband, Richard, arrives out of nowhere, gets down on one knee and asks her to remarry him. The first time the couple got married, it was in a small chapel in Las Vegas.

Richard has arranged for Danielle’s dress and for the vow renewal ceremony to be done at the resort. He has invited her dad to officiate the ceremony.

Danielle hopes that re-dedicating themselves to one another puts them on the right track.