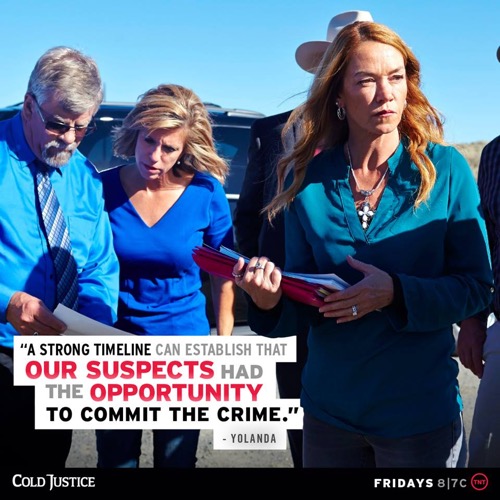 Tonight on TNT Cold Justice continues with an all new Friday January 23, season 3 episode 3 called, “Burned” and we have your weekly recap below. On tonight’s episode the burning death of a 67-year-old grandmother is investigated.

On the last episode, real-life crime series Cold Justice followed former prosecutor Kelly Siegler and former crime-scene investigator Yolanda McClary as they dug into small-town murder cases that have lingered for years without answers or justice. In 2004, someone crept inside a 25-year old’s bedroom window while she was sleeping and brutally stabbed her to death. Did you watch the last episode? If you missed it, we have a detailed recap right here for you.

On tonight’s episode as per the TNT synopsis, “real-life crime series Cold Justice follows former prosecutor Kelly Siegler and former crime-scene investigator Yolanda McClary as they dig into small-town murder cases that have lingered for years without answers or justice. In 2007, an upbeat, free-spirited 67-year-old grandmother was found burned to death in her home. It’s now up to Kelly and Yolanda to head to Fairview Park, Ohio, to determine how the fire was started and who was responsible.”

Arson cases are the trickiest one of all and yet Yolanda and Kelly are grappling with one on tonight’s all new episode of “Cold Justice” in order to investigate 67 year old Gwen’s death in 2007. Gwen had apparently died in a house fire but there is a lot of inconsistencies surrounding her death. For you see Gwen actually died of blunt trauma and there was in fact no soot found her in lungs.

So did a little old lady trip and fall thereby setting off a house fire? Or did someone use the fire to cover up her murder?

The two primary suspects on Gwen’s death were a pair of brothers. They were her neighbors Scott and his brother Tim that had come to stay with for a while. Scott was the one that had reported the fire but at the time he said he smelled smoke before he realized anything was wrong. And the first place he checked for a signs of a fire was his house.

Once he realized his home was safe – he then went on to ignore the smell until he could no longer do so. And that’s how he found it was his neighbor’s home that was burning all along.

Yet Scott claimed to be a good friend of Gwen’s. So the investigators wanted to know why he never checked on his neighbor when first caught a whiff of smoke. And besides Scott’s odd behavior there was also his brother Tim. Tim has a long and unsavory history of fraud. And days after Gwen’s death, Tim was found to have had three of Gwen’s credit cards on him as well as being in possession of Gwen’s rental car.

Now Tim had said Gwen had lent him all of those things but police remain suspicious of him. And brought him up on grand theft charges.

Tim had only recently moved in with his brother and befriended Gwen and yet in short time Gwen was proven to have been using him as a financial advisor. Meaning Tim had access to Gwen’s accounts and someone like him was mostly likely misusing her trust. For, while Gwen wasn’t addle-brained, she did grow up in a small and trusting town.

And it’s because of the town she lived in that Gwen hadn’t locked her door on the day she died. Later, the Fire Marshall told the ladies about his findings and so he explained to them he believed her killer came through that same door and killed Gwen. Then the killer set the fire to cover it up. A lot of flammable material was found on Gwen’s upper body and that made everyone think the killer wanted to hide bruises and other signs of trauma he or they might have left behind on their victim.

So the Fire Marshall believes the case is murder/arson. All the ladies needed to do after getting that confirmation was to find evidence. And that proved to be the trickier part.

There weren’t a lot of witnesses around and the few they did have constantly changed their story probably in hopes of trying to help out with the investigation. So the special interrogator the ladies brought in, Allan Brown, had tough time on his hands with this case. They were crossing off witness more times than they were getting useful information.

But then a friend of Gwen’s came in and she told the investigators about Gwen’s history with the brothers. It seems Tim was pretending to be an actual businessman as he was handing out financial advice and he had even taken control of her computer (the one he was supposed to have returned to her) that was later found on Tim after Gwen’s death.

Now that computer is very important to this case because after Tim had been arrested – his brother claimed that laptop was his when all along t belonged to Gwen who had wanted to become more knowledgeable.

So, really, all the signs are and were pointing to the brothers being guilty. Though there was one thing that was protecting Tim and that was his alibi. Tim’s alibi for Gwen’s murder was that he was already out of town when it happened. Yet when a Digital Forensics Expert, Eric Devlin, was brought in, they found proof Tim was still in the state during Gwen’s murder. And thanks to his phone usage – the ladies then knew Tim purposely lied to investigators.

He made calls prior to Gwen’s death and after her immediate death. But it was dead silent at the time frame from when she died. Meaning he was doing something that kept him busy.

And there’s other mounting evidence against Tim in particular. Because right around the time they found holes in his alibi – his brother talked to investigators and said he claimed that computer believing it had belonged to his brother. It looks like Scott was trying to help Tim but he hadn’t been aware of all that his brother was doing.

So eventually Scott was officially ruled out as a suspect. He was Gwen’s neighbor for four years and never had a problem with her until his brother arrived. The same brother the ladies learned had an ugly history with women. He would threaten them if they tried to leave him and he once told a woman he kill and her and her if she didn’t go out with him.

Hence, Tim wasn’t a man to easily accept rejection and prior to her death Gwen had fought a charge on her credit card that was ultimately proven to have been used by Tim. Tim had bought something without her knowledge and she fought the charge through the credit card company thereby implying she might have found out Tim was stealing from her. And that could be the reason he killed her.

When Kelly and Yolanda went looking for Tim, he refused to answer questions but that’s ok. They had already found enough evidence to convince the County prosecutor to formally bring the case in front of a grand jury. And that alone reassured Gwen’s daughters that were going to finally get justice for their mother’s murder.