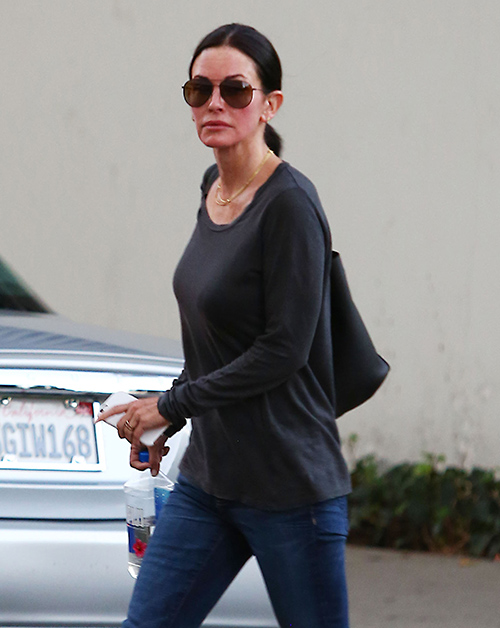 Courteney Cox recently dumped Johnny McDaid without any explanation, but it turns out the Friends star hired a private investigator just prior to calling it quits. Courteney reportedly tried to work on some major trust issues she had with her Snow Patrol rocker boyfriend but finally gave in after looking into McDaid’s whereabouts.

Cox was definitely in love with her rockstar boyfriend according to an In Touch insider who claims the Friends star tried to look past some past transgressions because the 51-year-old cougar really wanted to make things work with her much younger man. Courteney just couldn’t shake the feeling that something hinky was going on. According to In Touch, McDaid had been spending a lot of time away from his fiancee recently and things had been a bit tense.

It’s unclear what may have happened between Courteney and Johnny to cause the celebrity couple to drift apart. It seems that the Friends alum was right when she started wondering if McDaid was getting his loving from somewhere else. Otherwise there was really no reason for the abrupt split between Cox and McDaid.

Apparently, Courteney Cox got the news nobody wants to hear when working with a private investigator because the Friends star ended her 17-month engagement to Johnny McDaid and it looks like there’s no going back now. This isn’t recent though, as the whole cheating scandal went down right before Jennifer Aniston’s wedding.

Cox broke down after hearing the bad news about her bad boy fiance and dumped him back in July but it was very brief. Courteney took the Snow Patrol rocker back almost immediately and tried to fix the broken trust between them. The troubled couple made it through Aniston’s wedding okay but now, after hitting another rough patch, Courteney Cox is walking away from her engagement to Johnny McDaid. The Friends star tried to forgive her man but she obviously couldn’t forget what horrible news she learned. Now, Cox has decided to look for love somewhere else. There is still no word on the split from reps for McDaid or Cox.