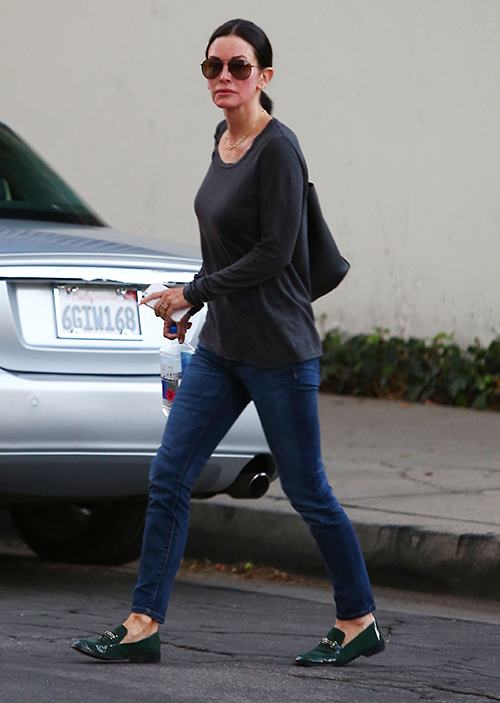 Courteney Cox’s engagement is off, and the 51-year-old ‘Friends’ alum is officially single and back on the market. Courteney Cox and her long-time and much younger boyfriend Johnny McDaid of the band Snow Patrol announced a nauseatingly cute engagement on social media in June 2014. Despite multiple rumors over the course of the past year that the couple was married in a secret ceremony or planning on eloping, they never actually said “I Do.”

According to a new report from E! News, Courteney Cox and Johnny McDaid won’t be saying “I Do” anytime soon – or ever for that matter. The couple has split up and gone their separate ways. Neither Courteney nor Johnny have commented on their breakup, but E! News’ sources have confirmed that their split is the real deal.

It’s no secret that Courteney Cox desperately wanted to get down the aisle, unlike her fiancé (McDaid is only 39 years old) – Courteney is over 50, and she was ready to settle down.

Of course, the fact that her BFF Jennifer Aniston finally got Justin Theroux down the aisle after being engaged for nearly half a decade only further fueled Courteney’s desire to get married – the sooner the better.

Although no one is really stating what went awry between Johnny and Courteney, general consensus on the internet is that Johnny was tired of being practically pushed down the aisle – and his fiancée was putting a bit too much pressure on him and her need for a wedding ring.

Are you shocked that Courteney Cox and Johnny McDaid broke up? Is there a chance they could get back together – or is this the end of the road for the Snow Patrol musician and ‘Friends’ actress? Let us know what you think in the comments below!