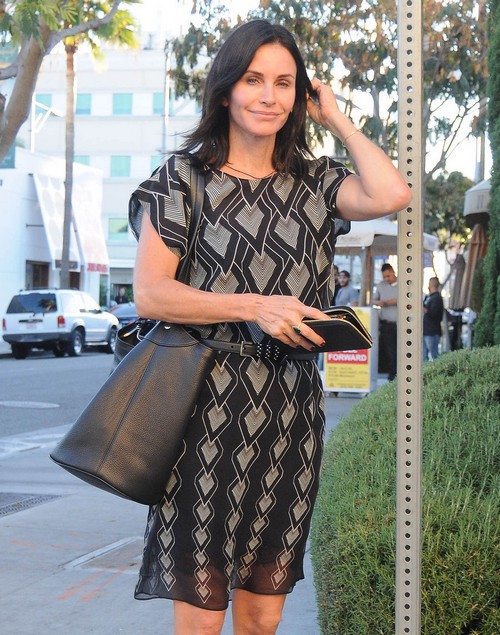 ‘Friends’ actress Courteney Cox is pregnant according to a report. Courteney Cox and her new fiancée Snow Patrol front man Johnny McDaid have had us all on wedding watch since they announced their engagement in June. Courteney likes to keep her private life private, so details on the couple’s nuptials have been few and far between. Some sources report that McDaid and Cox are going to say their “I Do’s” this month, and others claim they already are married and had a secret ceremony. But, according to new reports Courteney and Johnny are celebrating something else – and it’s not their marriage.

According to the December 1st edition of OK! Magazine, Courteney Cox is pregnant, thanks to IVF treatments! The 50 year old actress has always openly supported in vitro fertilization, so we’re not exactly surprised. OK! Magazine reveals, “Insiders are buzzing that thanks to IVF Courteney may be expecting! Everyone is ecstatic at the thought, especially her 10 year old daughter Coco, who has been begging for a sibling.”

If Courteney and Johnny haven’t already had a secret wedding, then they will most likely be rushing down the aisle any day now so that they can be officially married before their little bundle of joy arrives. We’re a little surprised that the couple would start IVF treatments and begin planning for a baby so soon, seeing as how they have only been engaged for five months. But, you also have to take in to consideration that Courteney is fifty years old and she doesn’t exactly have time to wait and see how their relationship will pan out.

Do you think Courteney Cox is pregnant? Is it a little crazy for her and Johnny to be starting a baby since they have only been engaged six months? Let us know what you think in the comment section below!

Does Courteney Cox have a baby bump on November 7? FameFlynet