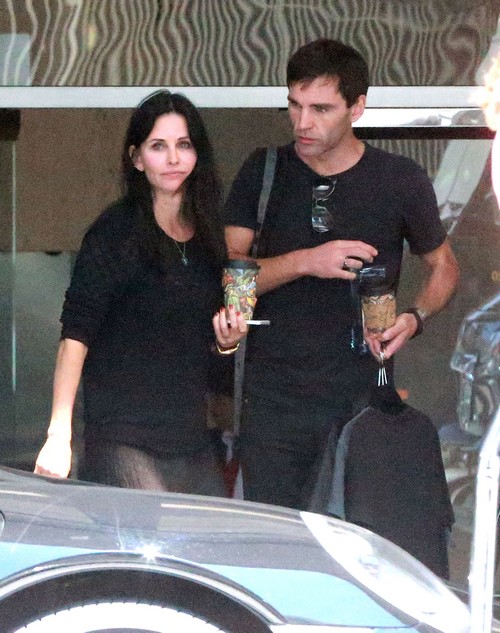 Courteney Cox and her latest boytoy boyfriend, Johnny McDaid, were spotted exiting an office building in West Hollywood earlier this afternoon. Courteney didn’t look thrilled as she was photographed exiting the building, but if the rumors are true, why would she be? According to recent reports, Courteney was looking to have another child, this time with Johnny. However, it’s possible that she’s been trying to get pregnant, and hasn’t been successful. Her past experiences with infertility were very trying for the actress, so it’s possible that she’s going through the same issues while trying to conceive again.

It would certainly explain the long face, and also why she was visiting the medical office building. Of course, it’s also possible that she and Johnny are trying for IVF, considering that it might be difficult for her to get pregnant naturally.

At 49 years old, Courteney isn’t exactly young, but that’s nothing new in Hollywood. Actresses in their late forties and even early fifties are having kids all the time, both naturally as well as through IVF and adoption. If Courteney really wanted another kid, there’s plenty of options for her to go through. Right now, it looks like she’s trying her best to get pregnant again via natural methods, but if it doesn’t happen with Johnny, I don’t think it will happen again.

Really, if all else fails, her best shot would be adoption. If it’s good enough for Sandra Bullock and Angelina Jolie, why not for her? She already has one kid, Coco Arquette, with her ex-husband, David Arquette. If she wants another more than a decade after her first kid, she’ll have to get used to some disappointing attempts before she’s successful – whether it’s through pregnancy, IVF, or even adoption.