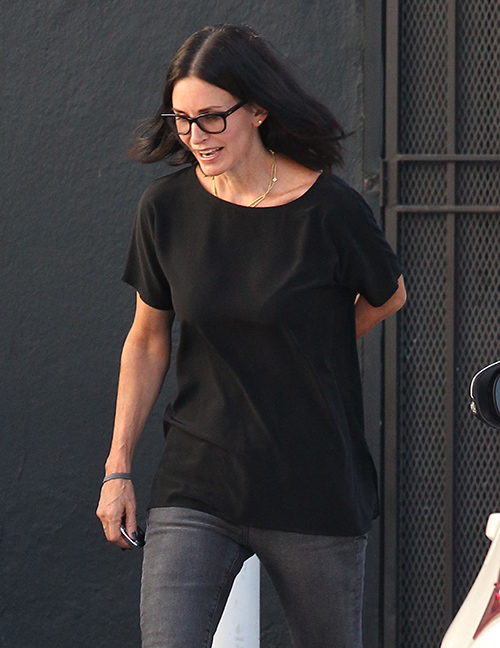 Courteney Cox is getting over her recent split with Snow Patrol rocker Johnny McDaid by firing up a long-awaited rebound with her Friends co-star Matthew Perry. A new report claims that Courteney turned to her old pal Matthew after her recent split. The old friends ended up reconnecting and now fans get to see what a Monica-Chandler relationship would look like in real life.

Fans of Friends have wanted Monica Geller and Chandler Bing to get together in real life just like on the show and now it may be happening. Star magazine claims a source close to Courteney has spilled the dirt on the Friends stars turned friends with benefits. The source allegedly told Star, “It’s no surprise that Matthew was one of the first people Courteney called after Johnny left her. They’ve leaned on each other before — during her infertility struggle and his battle with addiction.”

Star’s source claims that Cox and Perry bonded over past breakups. Courteney reportedly came calling on her friend Matthew Perry after dumping ex-fiance Johnny McDaid. The split rumors have been pretty nasty and apparently Courteney dumped McDaid after hiring a private investigator. Cox must have learned something she was hoping not to and the Friends star was devastating.

While leaning on Matthew Perry, the report claims Courteney caught feelings and the unofficial pair started spending more time together and things got physical. The secret source said, “Matthew invited her [Cox] over to talk one night and they ended up hooking up!” Courteney and Matthew are reportedly taking things very slow but are still spending plenty of time together.

It’s safe to say it might be a while before we find out if Courteney Cox and Matthew Perry really are an item. The secret source also mentioned that the Friends couple are happy with the way things are right now and aren’t in a rush to go public. That’s pretty convenient since Cox and Perry typically don’t respond to stories about themselves in the press.

One issue that does make the whole Courtney and Matthew romance seem questionable would be a social media post that recently went viral. Right before the Friends hookup story happened, a fan posted side by side pictures of Perry gazing at Cox with a message that read, “matthew looks at courteney the same way chandler looks at monica and i don’t know what to do with myself.”

The problem is, the paparazzi picture of Perry and Cox sitting together isn’t recent. The photo is from a 2005 lunch meetup between the actors and the photo has been public long enough to prove it wasn’t recent. That hasn’t stopped fans from hoping Courteney and Matthew are really seeing each other though. If the reports are true, that is exactly what is going on now that Cox dumped McDaid.