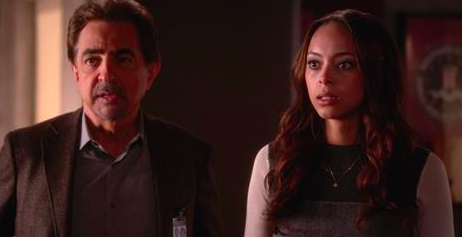 Tonight on CBS Criminal Minds continues with an all new Wednesday November 11, season 11 episode 7 called “Target Rich,” and we have your weekly recap below. On tonight’s episode The BAU helps Rossi’s journalist daughter, Joy (Amber Stevens West), investigate the disappearance of a college student.

On the last episode, a woman was murdered in a Florida town comprised entirely of sex offenders, which left the BAU literally with a community full of suspects. Meanwhile, Lewis considered a career opportunity that could take her away from the BAU. Did you watch last week’s episode? If you missed it we have a full and detailed recap right here for you.

On tonight’s episode as per the CBS synopsis, “the BAU helps Rossi’s journalist daughter, Joy (Amber Stevens West), investigate the disappearance of a college student. Also, the team is alarmed when Giuseppe Montolo (Robert Neary) dies in prison after he warns Morgan about the “Dirty Dozen,” an underground group of hitmen, and JJ returns from maternity leave.”

Giuseppe Montolo made contact on tonight’s episode of “Crimial Minds”. Apparently, after some much needed treatment, he had finally decided to turn against the other internet based hitmen.

Only one of the guards had been hired to kill him before he could reveal any names. So Morgan ended up making a wasted journey that served to further frustrate him. It seems had been the most optimistic about finding out what Montolo had been into and yet it had all came to nothing with Montolo’s death. Particularly as Montolo had been their only lead on the part of the dark web.

However Morgan didn’t let what happened at the prison stop him from celebrating JJ’s return. A team member of theirs had finally come back after an extended maternity leave and everyone had missed her. Rossi though had to later step away from the party when his daughter Joy called him about a story she was investigating.

Joy as it turn out had been writing a piece for Esquire about violence against women on campus and, because of previous mishap in that area, she had to literally double-check every source available. Though what she found turned out to look more like a case for the BAU than a possible story. See, she had been interviewing women from across the nation and what she found was a pattern of missing college students so she decided to bring it to the attention of her father the BAU agent.

Joy never would have bothered her dad but another young woman by the name of Bahni Desai had gone missing in the last twenty-fours and she felt there was a chance that Bahni could still be alive. So she asked her dad to look into it and he pulled the BAU into the case. Because that was what was important – the fact Joy did stumble across a case.

They had looked into Bahni’s whereabouts on the night she went missing and it looks she had been drinking at a party before she had left to walk back to campus on her own. So at that point she was already considered high-risk but then security cameras from the street she was on revealed that she had caught more than one man’s attention as she did her best to stumble home. And one eye-witness said she had eventually gone off with someone.

But prior to be identified as an eye-witness, Sam Burnett was considered a possible suspect. Therefore Joy took it especially hard when she learned the BAU had to let him go because at that point she had been sure that Sam was the guy.

And a frankly curious Rossi could be a dangerous Rossi.

Joy wasn’t as sure of Sam’s innocence so she called him as a reporter to set up a meeting. But then did something stupid like follow Sam as he led her into a dark alley. So Joy was definitely putting her life at risk over the case.

However she made a lucky escape when the BAU realized Sam had been their campus Unsub. They had taken in-depth look at his background and it did match up to the first time campus girls began to go missing. Starting with girl named Kathy Miller who had gone to NYU the same time Sam had.

So Joy was asking Sam about Kathy because she too found a connection when he then started to threaten her. Though fortunately her dad showed up not long after that and the first thing he did was chastise his adult daughter for being so reckless. On one hand he understood what she did but on the other he remembered his grandson who could have ended up mourning a mother.

And the reason Joy had taken to the case the way she did was because she was once the drunk college girl stumbling him yet no one had come to her rescue.

So Joy had made the case personal but in doing that she did get some information off of Sam. He had seen Bahni’s abduction and hadn’t stepped in. Apparently monsters protect monsters and Sam hadn’t interfered because he was the man that was kidnapping women from campuses. And he would have done that to Bahni if her stalker hadn’t abducted her first.

Bahni had been ordering frequently from a Chinese restaurant and the delivery man was one of the few guys that had a yearlong pass to visit the campus. So that’s how Garcia found their UnSub but Bahni’s life was never in danger with him. Tom it seems had made himself believe that she was the love of his life and he had even killed his own father when the other man wanted to kill her in order to get rid of evidence.

So Bahni was safe when the BAU found her and she was later grateful when she was returned to her family.

She uses twelve different computer bots whenever she’s searching the dark web and now men from the dark web want to shut her down.