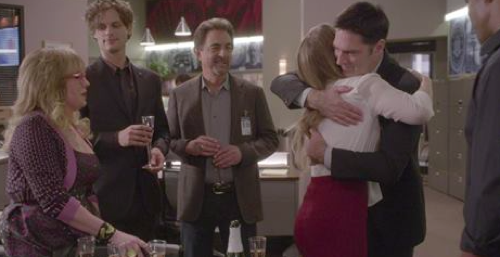 Tonight on CBS Criminal Minds continues with an all new Wednesday December 2, season 11 episode 9 called “Internal Affairs,” and we have your weekly recap below. On tonight’s episode, after two undercover DEA agents are murdered and a third goes missing, the BAU joins the NSA to investigate whether an underground Internet drug syndicate is involved.

Criminal Minds is an American police procedural television series created by Jeff Davis. It premiered on September 22, 2005, on the broadcast network CBS, and is produced by The Mark Gordon Company, in association with CBS Television Studios and ABC Studios.

On the last episode, the BAU hunted an UnSub in Phoenix who was kidnapping victims and depriving them of sleep. Also, Hotch and Garcia dealt with the threat from the underground hitman group. Did you watch last week’s episode? If you missed it we have a full and detailed recap right here for you.

On tonight’s episode as per the CBS synopsis, “after two undercover DEA agents are murdered and a third goes missing, the BAU joins the NSA to investigate whether an underground Internet drug syndicate is involved. Also, Hotch hopes the team’s work with the NSA brings them closer to finding the “Dirty Dozen” hitmen ring.”

Hotch and his team were personally asked by the Director of the NSA to look into the death of a murdered DEA Agent on tonight’s episode of “Criminal Minds”.

It seems the NSA and DEA had come together to create a joint task force in order to investigate the Libertad cartel. Now the cartel itself had been fairly new but what caught the notice of two federal departments of the US Government was the fact Libertad was setting itself up as something more. Not only did it have an online drug trafficking presence but it also had an on the ground component.

And so three different DEA agents were sent in as potential buyers over a four month period. Libertad operated on a pyramid scheme and practically anyone could find themselves as members. Yet the agents had barely managed to touch in with home base much less pass on information before one by one they began to drop off radar.

First it was Agent Mark Bowers and it had been his body that sparked the initial investigation into the remaining agents’ disappearance, but it had been while they were on the case that the body of Agent John Portman showed up on U.S. soil. Mark’s body had been found in Mexico and according to reports he had been found not that far from another cartel’s mass grave site. So the BAU’s first reaction was that someone wanted to lay the blame on someone else.

And yet the more they heard about what happened to Mark, including the fact he had been found the remains of someone’s face rather than his own, the BAU stopped thinking about warring cartels. Instead they believed they had a serial killer on their hands. Who had probably been killing for years and had just been using cartel dumping sites as way to escape detection.

So Hotch had quickly informed both the DEA and the NSA about what he believed happened to their missing agents. Apparently the BAU believed their UnSub might have gotten involved with Libertad thanks to their loose recruitment practices and that once his skillset had been figured out by their leader – the UnSub had then been used to do away with anyone “Benjamin Franklin” found suspicious.

Though that was a thing with Libertad. They didn’t use real names and no one knew who George Washington really was or whether his number two who went by Benjamin Franklin was even a man. But Mark had told his people, before he disappeared that is, that he was close to setting up a meeting with Benjamin Franklin.

And unfortunately that was a stage many of the others got to as well.

But thing were rapidly deteriorating back in El Paso. Hotch had told no one else besides Rossi that the real reason they got the case was because Axelrod suspected the assistant director of the DEA of having been personally involved in Libertad. If not running.

And so Hotch had been naturally suspicious of Bernard Graff.

Yet it had been Graff and most of his team that were dying off like flies. Therefore it hadn’t been Graff that had been the mole and so Hotch asked Graff’s second in command whether or not she had any information they could use. And she handed over the flashdrive that Graff had given her for safekeeping.

It seems Graff had been investigating a mole and he had just found something when and was about to tell Hotch when he had been found dead. From an apparent suicide in fact. Thus Hotch had Garcia follow the breadcrumbs that Graff had managed to put together and she found out the mole hadn’t been in the DEA – it had been in the NSA.

Cochran who was high ranking official apparently also went by the name “George Washington” and a couple of years ago he had squashed an investigation into a serial killer in order to recruit that man and have him tie up loose ends. Although, thankfully, Lewis and Morgan got to Agent Sara Miles before she could be tortured and murdered like her fellow agents.

The UnSub’s name had been Dufour and he had liked skinning animals when he was younger because he wanted to know what it was like in someone else’s skin.