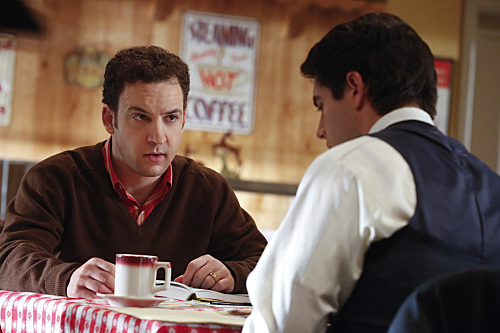 Tonight on CBS Criminal Minds starring Thomas Gibson and Shemar Moore continues with an all new Wednesday January 28, season 10 episode 13 called “Anonymous,” and we have your weekly recap below. On tonight’s episode, the BAU revisits its origins.

On the last episode, the BAU searched Tallahassee for a serial killer who called the authorities to report the crimes prior to committing murder. Also, as Rossi prepared for a weekend visit with his daughter, Joy, received startling news about the death of a comrade in Vietnam. Did you watch last week’s episode? If you missed it we have a full and detailed recap right here for you.

On tonight’s episode as per the CBS synopsis, “the BAU revisits its origins when they look at one of Rossi and Gideon’s old cases to track a killer that got away.”

Jason Gideon, former BAU member, was murdered on tonight’s shockingly new episode of “Criminal Minds”. And now all of his past friends/co-workers are blaming themselves.

It’s just that the murder was so random. It literally came out of nowhere and instead of questioning why a retired profiler was attacked to begin with – the team is instead punishing themselves for not having contacted their friend in years. When Gideon retired, he basically dropped out of everyone’s life.

Yet, once upon a time, Gideon was who the team turned to if ever they needed advice. So, although it’s unprofessional to do so, this case is personal. The BAU wants to make amends to a fallen soldier.

And, funnily enough, Gideon is actually helping the team from beyond the grave in solving his own murder. It seems that Gideon left a message in the final seconds before he died. And he did so knowing Rossi would pick up on the clues.

Rossi and Gideon had worked a case back in 1978 and it has gone unsolved ever since. Yet the clue, the one Gideon had left behind, showed he had put his focus back on that case. Meaning, Gideon perhaps wasn’t as retired as everyone thought.

Back in the day, the guys were searching for a seasonal killer. He would kidnap and kill a new woman every three months. And then suddenly their killer just stopped. Which hadn’t really made sense at the time but a quick search on Gideon’s computer helped solved some of the mystery surrounding it.

Apparently, Gideon had recently come upon a case involving a murdered woman in her late forties. And the woman ended up matching the description of this seasonal killer supposedly last victim. So Gideon started to believe that the reason their killer abruptly ended his killing spree is because he found one victim he wanted to keep for several decades.

But, now this BAU team is facing a problem. Because if they’re Season Killer really did kill a bunch of women until he found a “perfect fit” then he’s going to have to do that again to replace his last victim.

And, unfortunately, he’s already started. The UnSub targeted a young woman by pretending to be wheelchair bound and then dragged her unconscious body back to his “nest”. Nest being the only appropriate word in this case seeing as the UnSub had an unnatural obsession with birds and his victims.

In fact this case is what originally drew Gideon’s interests to birds. The UnSub would leave behind a bird in each of victim’s hands. Except for Tara whom he found to be special enough to keep.

So they looked into Tara and her mother had used the word “broken” to describe her only child. It seems Tara was incredibly shy and she spent most of her (recorded) life as an introvert. And so whoever took her must have been drawn to someone like himself.

An introvert merely wanting company but going about it in all the wrong ways!

Garcia followed up on the weird bird thing and she found the nephew of the founding member of a Bird Appreciation group. It appears the founding member that had also raised her emotional unstable nephew had died back in the 70s around the same time the original murders happened. So with that being the case, Donnie the nephew then went about searching for replacement for his aunt.

Until eventually he found Tara.

Hence, after they found out about this Donnie, the feds quickly surrounding his home and although they managed to reach his victim first – there was still some unsolved issues left to deal with.

It was Rossi that found Donnie and rather than bring him in peacefully (which he could have easily done seeing as he had the upper hand at the time) – Rossi set Donnie up. He allowed Donnie to reach for his weapon first and that meant what happened afterwards could only be classified as self-defense.

Rossi killed Donnie and he avenged his friend’s murder in doing so. And then after that, the team made peace with what happened. They packed up their things and were preparing to head home. But before they left, Rossi told Gideon’s son (who was named after him) that if he ever need anything than all he has to do is ask.