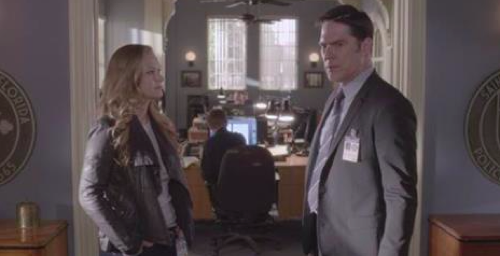 Tonight on CBS Criminal Minds continues with an all new Wednesday December 9, season 11 fall finale called “Future Perfect,” and we have your weekly recap below. On tonight’s episode, the BAU go on a search for an UnSub and sets the stage for what promises to be another disturbing episode.

On the last episode, after two undercover DEA agents were murdered and a third went missing, the BAU joined the NSA to investigate whether an underground Internet drug syndicate was involved. Also, Hotch hoped the team’s work with the NSA brings them closer to finding the “Dirty Dozen” hitmen ring. Did you watch last week’s episode? If you missed it we have a full and detailed recap right here for you.

On tonight’s episode as per the CBS synopsis, “the BAU searches for an UnSub who may be fascinated with medical experimentation that will no doubt be undoubtedly painful and wrong.”

Two bodies were found out by the swamps when a young couple just happen to stumble across them while looking for fresh frogs.

But before the BAU could acknowledge what was technically their luck, they had to actually review the new case on their hands. And unfortunately for them it was a doozy because it looks like they were searching for a particular UnSub with an unusual blood fascination.

Out of the bodies that were found, there was something clear off with one of them. The female victim had an extremely pale complexion and it was later revealed that she had been exsanguinated. Or in other words someone had drained her of her blood.

Yet surprisingly that hadn’t been the case with the second body. The male victim was older and had no visible marks on his ruddy complexion. Therefore the BAU pondered a blood fetish was involved.

Only they were still pondering the idea of the blood being used for something else when there was apparently a leak of information. The media had found out about the blood and had of course gotten carried away with the idea of a blood worshipping cult murder. So JJ’s first course of action was to calm them as soon as possible so that they wouldn’t risk antagonizing their UnSub.

However the UnSub didn’t need any provocation. He was unravelling all on his own and his third victim was clear proof of that.

Harold fit the idea that the BAU had come up with. See, the first two victims consisted of one severely ill patient and one younger/ far healthier woman. And so the UnSub who studied these people beforehand had ultimately chosen them based on those specifics.

It seems the UnSub was conducting off the books experiments and was in fact using his victims as unwilling guinea pigs.

The young woman was Cheyenne. She was an unemployed waitress and was considered to be flighty so no one was concern when she disappeared from a few days. Meanwhile the chronically ill older gentleman had been a retired shut-in with no family to speak of. Thus he too was able to disappear without anyone raising any sort of alarm.

But after Cheyenne had been drained of her blood, the UnSub had used an IV to inject into poor George. And eventually DNA testing was able to find other things in George’s system. Such as animal DNA.

And yet the experiments came to nothing after both test subjects died. Therefore the UnSub went out and found even more people. He went on to kidnap Harold who suffered from epilepsy and he had also kidnap another woman by the name of Andrea.

So once the BAU had realized two more had gone missing, they weren’t expecting to find the bodies so soon. But Harold hadn’t been held for more than a day before he showed up dead and covered in bruises. And so that’s when the BAU knew their UnSub was unravelling.

Harold had died before the UnSub had been finished with him so the bruising was a sign of an escalation. It had become apparent to them that their UnSub couldn’t handle any setbacks and that his experiments were going to continue to fall apart because they had no grounding in actual scientific study. The labs ran tests on all of his victims and they told the BAU that they were looking for someone either extremely naive or just plain insane.

The Magic Man as he was dubbed was looking for the impossible with his experiments – he was seeking a cure himself for mortality.

And Garcia came across Bobby Boles when he hit all the markers on the creepy scale. Bobby had worked at the zoo the same time a rare bird had been stolen and that exact bird’s DNA had been used in the experiment. So Garcia kept on looking into Bobby and she found out he came to work as an orderly at the same hospital that a doctor had recently disappeared from.

Therefore the BAU realized how Bobby was getting his drugs and for the matter where he was finding his sick patients. But they finally found him because he had an aquarium deliver him jelly fish outside of an abandoned medical facility. And jelly fish happened one of the animals that he used.

So the team were able to find Bobby before he could kill Andrea but his “experiments” sadly hastened his other patient’s demise. And elderly woman and her husband had been looking for a magical cure and they refused to believe all the doctors when they were told she would only have months – so rather than months – the couple were left with hours.

And Bobby’s parting words were that he could still do his experiments in prison. It seems Bobby was obsessed with staying young and so he wasn’t going to give that up for anyone.

But Garcia finally received some goods, Hotch told her that they might have found a way to end the dark web once and for all.