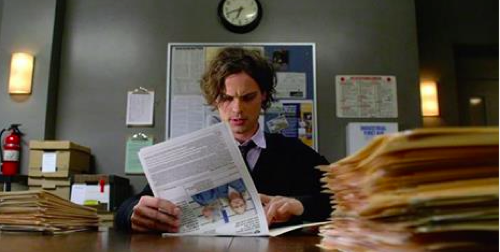 Tonight on CBS Criminal Minds starring Thomas Gibson and Shemar Moore continues with an all new Wednesday March 11, season 10 episode 17 called “Breath Play,” and we have your weekly recap below. On tonight’s episode, the BAU is called to Wisconsin in search of a serial killer.

On the last episode, when two guards at a privatized maximum security prison in Texas were murdered, the BAU suspected that more than one UnSub within the prison could be at work. Did you watch last week’s episode? If you missed it we have a full and detailed recap right here for you.

On tonight’s episode as per the CBS synopsis, “The BAU is called to Wisconsin in search of a serial killer, and the team looks for a connection among the victims for clues to the UnSub. Also, Kate has trouble dealing with her niece, Meg, when she begins acting out.”

Kate is pregnant on tonight’s all new episode of “Criminal Minds” and her niece/adopted teenage daughter isn’t taking the news so well. Meg had apparently pierced her own belly button as a way to get attention and Kate then had to rush her to Morgan’s doctor girlfriend to get her checked out. Luckily, the girl was ok but Kate honestly doesn’t know what to do with her. And Meg is technically in that rebellious stage where she doesn’t want to talk to anyone.

So Savannah stepped in. Morgan’s girlfriend offered Meg a safe place to talk about whatever she likes. She says she knows what it’s like to have a loved one constantly on the road.

And speaking of which, Kate and the rest of the team eventually had to head out to Wisconsin for a new case. Their UnSub has killed three women so far. Mary, Donna, and Emma.

All three women were found in their homes (all located in middle-class suburban neighborhoods). They were tied up and each showed evidence of a sexual assault. But one of the disturbing things about this case is how patient their UnSub has proven to be.

All signs point to the UnSub being inside of the house for hours on end before making a move. So that means he’s capable of watching his victim for possibly longer than that. Particularly if he wanted to learn their movements and sneak in when they entered their homes and know when said women were the least vulnerable.

Yet, that’s all there is that connects the women to each other. They never crossed paths and they were various ethnicities. Furthermore, one dated around, the other hardly dated, and one of them was married. So really the only connection there was is that all three of them could have possibly have let their killer in.

Patrick Jon Murphy is a family man. He has a wife and a couple of kids but all the same he talks to lonely women claiming to be single and unattached. And then he lets himself into their homes at night (which they were expecting) and then he kills them (which they didn’t see coming). So why are these women letting him into their homes.

A new victim was found while the BAU were in town and something at the scene of the crime caught JJ and Rossi’s eye. It was a book with similar wording to something they came across in of the other victim’s file. So they had Garcia looked into it and apparently it’s a popular book called Bare Reflections.

And, well, Patrick does have an overworked wife and new baby at home. So that’s his trigger.

The BAU later found out about it after they noticed there was a pattern going back years. It seems that before Bare Reflections came out, Patrick mainly focused in on prostitutes. And typically there would be a long period in-between his crimes. So Garcia looked into it and she found a man within the “hunting zone” that had children born in each year the killings started up again.

The only difference now is that the book Bare Reflections has somewhat justified Patrick’s “urges”. You see Garcia found out that Patrick had witnessed his neighbor strangling his wife during sexual intercourse back when he was twelve. So that’s what initially sparked his interest but when his wife wasn’t in the mood to take the sting off of these urges, that often happens with a new baby in the picture, he began killing women.

And both the BAU and his teenage daughter walked in on Patrick trying to kill his nanny.

The poor nanny had dropped off the Bare Reflections book for his wife one day and that one act had Patrick priming her as his next target. Though, while a fan of the book, the nanny however didn’t want to become involved in any sort of role-play. Especially not with her married boss. So it was actually a fight for Patrick to tie her up and that battling back and forth ended up buying her enough time for help to arrive.

Patrick wasn’t going to hurt when she accidentally walked in on him strangling the nanny but he didn’t have time to flee. Hence in the end, Patrick was brought down quite easily. And now his family are the ones left trying to figure everything out.