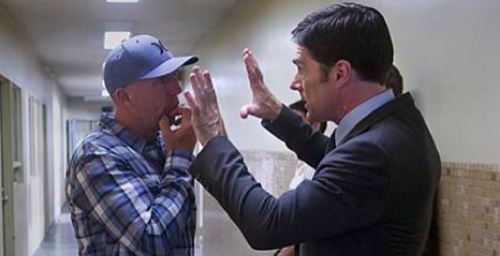 Tonight on CBS Criminal Minds starring Thomas Gibson and Shemar Moore continues with an all new Wednesday March 4, season 10 episode 16 called “Lockdown,” and we have your weekly recap below. On tonight’s episode, two guards at a privatized maximum security prison in Texas are murdered.

On the last episode, victims in California had the BAU searching for an UnSub who may have witnessed abuse as a child. Meanwhile, Kate showed parental concern when her niece, Meg, made a date with a friend to meet a boy they met online. Did you watch last week’s episode? If you missed it, we have a full and detailed recap right here for you.

On tonight’s episode as per the CBS synopsis, “when two guards at a privatized maximum security prison in Texas are murdered, the BAU suspects that more than one UnSub within the prison could be at work.”

The Warden of a privatized prison has contacted Hotch and his team personally on tonight’s all new episode of “Criminal Minds”. And although the prison is not exactly in their jurisdiction – Rossi convinced Hotch to take the case. Two prison guards were unfortunately murdered recently and the Warden was making a pretty hard sell about both being family men prior to their deaths. So Hotch flew his team out to Texas.

However they had no idea what to expect once they got there. The Warden it seems had merely put them in the prison with over two thousands inmates and several remaining guards that can all be suspects. So the team suddenly found themselves having to tread careful.

Nothing was what it appeared to be, including the Warden, and even the guards that were murdered weren’t as clean cut as it was first reported. Apparently the two officers that died had a bit of a reputation around the prison. As in they often tortured some of the inmates for fun. And the chief suspect, Julio Watson, actually had motive to kill the both of them.

Julio is a confessed murderer and he just transferred into the prion a little over a month ago. Hence, the reason the BAU initially suspected him. But he told Rossi and Morgan that they had turned the hose on him one day just because they could.

Yet, before the BAU could begin to look into Julio, another murder had been reported inside of the prison. And this time it was an inmate.

Despite being on lockdown, prisoners with special privileges were allowed to move around freely. And so in this case a serial rapist was allowed to use certain facilities such as the showers. But someone got to him and though he was mostly killed like the guards – the prisoner was also sexually assaulted.

So the team took a hard look at the prison and they noticed a few things were adding up. How could a serial rapist gain privileges as easily as ratting on people yet someone like Devon White was thrown into solitary for merely hiding candy in his cell. And then wondered what all the money the guards were passing back and forth meant.

The prison didn’t have all the necessary security cameras up and so the private company running the place didn’t even bother giving the guards any sort of pay raise. Though, for some reason that didn’t stop checks ranging from the hundreds to thousands passing amongst them. So the team theorized the guards were betting on something and they didn’t know what until another inmate showed up dead.

Only this time Patrick Butler was being accused of killing the two guards and was attempting it a third time with a guard when said guard was able to overpower and killer him.

So case close right but the idea of Patrick turning into a serial killer didn’t make that sense. At least to people who have read his prison record like Reid did. And because of that, you see, the team figured out Patrick was very much like Devon White. A man whose name kept popping up in their investigation.

Like Devon, Patrick wasn’t a violent man in the beginning. He had actually come to the prison on a non-violent offense (again like Devon). Yet prison appeared to have changed them both. Suddenly, one day, they were constantly involved in fights. And they each had a long record at the infirmary as well.

So the team started to think about how these men could change somewhat overnight and the only thing that made sense was a fight club inside of the prison.

A fight club could explain the bruises and the guards being behind it could also explain why the inmates were being as close mouth as they could about Devon White. A man no one wanted to talk about. And it turns out there was a pretty good reason for that.

Devon it seems had never made it out of the prison. Instead he had died during one of his “fights” and the guards had covered it up.

Everything , though, eventually came out when one guard decided to confess to burning the body. Apparently he wasn’t involved in most of what happened but because he was in the wrong place at the wrong time – such as being a witness to Devon’s murder – he was then forced to comply with the other guards in burying the evidence. The others had threatened his daughter if he didn’t.

But the guard in charge of the fight club was the same man watching over the security footage. So when he saw the way things were going – he then opened all the cell doors in hopes of a prison riot.

Fortunately, however, his plan to kill off everyone in the room during the confession did not in fact work out. Some of the other inmates realized how bad it would look to kill federal agents and though Morgan and Kate were roughed up bit – the inmates turning on each other bought them enough time for the cavalry to arrive and save them. So at the end of the team’s journey there – the prison and more importantly the people running it finally got what they deserved.

Some justice for once!