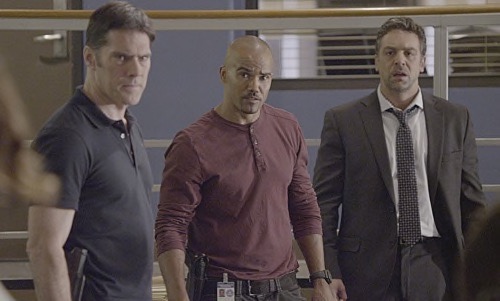 Tonight on CBS Criminal Minds starring Thomas Gibson and Shemar Moore continues with an all new Wednesday March 25, season 10 episode 18 called “Rock Creek Park,” and we have your weekly recap below. On tonight’s episode, when the wife of an up-and-coming congressman disappears.

On the last episode, the BAU was called to Wisconsin in search of a serial killer, and the team looked for a connection among the victims for clued to the UnSub. Also, Kate had trouble dealing with her niece, Meg, when she began acting out. Did you watch last week’s episode? If you missed it we have a full and detailed recap right here for you.

On tonight’s episode as per the CBS synopsis, “when the wife of an up-and-coming congressman disappears, the BAU investigates his political enemies as possible suspects.”

Sophie Troy was abducted in broad daylight on tonight’s all new episode of “Criminal Minds” and if the BAU doesn’t find her in time then the kidnappers can possibly use her kidnapping to manipulate her congressman husband into doing something for them. Like in a worst case scenario he decides to not lend his support to a very important bill. Apparently, Sophie’s husband Benjamin is one of those up and comers in Congress. Meaning he leads and there’s others that’s bound to follow.

And if it’s not his vote the kidnappers are after then Sophie is in even a worst position.

Since Ben became a congressman, he’s made a huge splash in the news and because of that he’s made a lot of enemies along the way. And unfortunately his enemies have the money and power to also want and are capable of carrying out a personal threat. For instance, he’s ticked off the oil companies and the NRA. But ended up surprising everyone, including the BAU, was the ransom note.

There they were, believing Sophie had been taken for politics, when the truth was she was taken for money. Later the kidnappers dropped off a ransom demand with a journalist and, oddly enough, their only desire was 20 million dollars. They could have literally have asked for anything but all they wanted was money. Preferably by midnight or claim they’re going to kill Mrs. Troy.

Yet the ransom demand is just not making sense. Like why would they believe the congressman has access to that much money? Most of what he gets comes from campaigning and it’s not legally possibly for him to able to use that money even if it was to save his wife’s life. So that kind of move indicates the kidnapper isn’t that smart. However the kidnapping itself was smartly done.

So who was pulling the strings here? Was it the person that orchestrated Sophie’s abduction or is it someone new?

The feds have been hearing things for the last couple of weeks and yet they had dismissed it in the beginning. It seems some low level Russian mafia guys had been talking about a package. So the people that were bugging them ignored it. Because unless it helps them take down the boss then they don’t really care about what some of the guys do to earn extra money on the side.

But then this kidnapping happened and someone made a connection. So while Reid is listening in on the mafia guys – the rest of the team is trying to decipher the weird call they got from the kidnappers. And apparently, this is whole thing has been personal from day one.

During the call, the kidnappers talked about Ben and his family screwing them over. So much so that Garcia looked into that allegation and what she found out is that Ben’s brother Paul had paid off some Russian drug dealers a couple of months ago. It seems he had owed them money and was taking too long to pay so his brother had to eventually step in to take care of it.

Paul, though, said he convinced to do this favor in exchange for keeping quiet about the intern Ben had been seeing on the side.

In actuality Ben had dated the intern before he met his wife and he’s been faithful to his wife since they’ve been married. But as for the intern, she refused to go away. She began harassing the congressman after he called things off and had gone on to threaten to kill herself, several times in fact, in order to get him to visit her.

Yet, the former intern is not smart enough, Ben’s mother on the other hand is. You see she never liked the woman her son came home with. He married her against his mother’s wishes. So she arranged for the kidnappers to kill this unplanned daughter-in-law of hers and allow her son to marry again. This time with her approval.

Hence the comment the Russians made about Ben and his family. Apparently they were only going to get 5 grand each so when they found who they had taken – they changed that fee to 20 million behind their boss’s back.

But even though Sophie had been rescued, thanks in large part to the mother figuring out she could risk her son’s career with her stunt and his crazy ex; Ben forgave his mother. And it seems like he still wants her help in pushing his career ahead.

So when the BAU figured out they were possibly dealing with Manchurian candidate situation – they had no idea how right they were in the end!