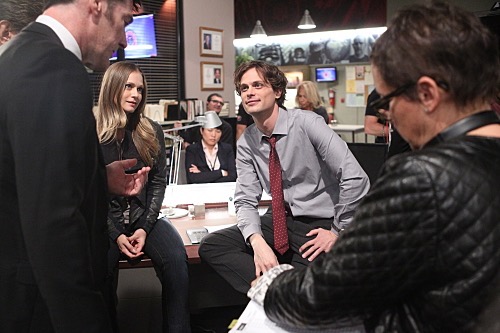 Tonight on CBS Criminal Minds starring Thomas Gibson and Shemar Moore continues with an all new Wednesday April 22, season 10 episode 21 called “Mr. Scratch,” and we have your weekly recap below. On tonight’s episode, when three people implicated in murders claim they were attacked by a “clawed shadow monster” at the moment each crime occurred, the BAU searches for an UnSub who is controlling their minds. Also, the search for the culprit puts one of the team in jeopardy

On the last episode, when a Maryland family was found murdered at their dining room table, the team tracked down other family members and friends to uncover secrets that may have led to it. Also, Hotch had to try to make peace with his father-in-law, Roy, after discovering he had been diagnosed with Alzheimer’s. Emmy Award and Golden Globe Award winner Edward Asner guest stars as Hotch’s father-in-law, Roy Brooks. Did you watch last week’s episode? If you missed it we have a full and detailed recap right here for you.

On tonight’s episode as per the CBS synopsis, “when three people implicated in murders claim they were attacked by a “clawed shadow monster” at the moment each crime occurred, the BAU searches for an UnSub who is controlling their minds. Also, the search for the culprit puts one of the team in jeopardy. Series star Matthew Gray Gubler directed the episode. Guest stars include Bodhi Elfman as mathematician Peter Lewis, and Thad Luckinbill as Larry Merrin and Kiko Ellsworth as Daniel Karras, two of the people implicated in the murders.”

Three people, all from various ethnic groups, social statuses, and even states, surprisingly all ended up having something in common. And, unfortunately for them, that was their stories seemed to match up after they had all been arrested for killing one of their loves ones.

See on tonight’s all new episode of “Criminal Minds” the BAU is looking for a most unusual UnSub. One that has so far managed to induce a psychotic break in three people that have never met or apparently crossed paths with each other at any time. Yet the team knows that their victims and in turn their victims has all been specifically targeted.

This was way too planned to have been a random a crime.

Not only did the “murderers” have no recollection of their crimes but there was evidence they had all been drugged at least twice. The first time to get them to live out their worst nightmares and the second dose was used to manipulate them into killing. But how is it possible that they all saw the same clawed monster in their worst fears?

Typically a drug affects several people in several different ways. Yet that’s not what happened with Daniel, Christine, or Larry. They all saw the same creature in their delusions. So Garcia was asked to conduct a search into the three that had been targeted and as it turns out they had all been adopted and in the same year.

Meaning there has to be a story behind what happened in 1985. And maybe that’s why the three were targeted in the first place. Someone wants to reveal the truth!

However a fourth victim was reported before the team could look into 1985. And the new case once again involved someone that was adopted in that year – only this time he killed himself instead of someone else. So it looks like their latest victim might have possibly resisted the dose.

Apparently, Bill was at home with his son when he was attacked. And JJ theorized that it might have been his paternal instincts taking over that made him kill himself rather than hurt his little boy. Thus Bill didn’t suffer like the others did and that must have ruined the UnSub’s plan.

1985, you see, was right around a mass hysteria event that more or less took over the United States. At the time, children everywhere were accusing their pre-school teachers of molestation and satanic cults. So Hotch believes they could be dealing with some of those very kids that had made those accusation and now someone is out for revenge.

But just as the BAU were getting somewhere with questioning Christine, the UnSub shut down their headquarters. Literally that is. All electricity was shut down and the team was left completely in the dark. Though, prior to cutting them off, Garcia did find out what he was really looking for when he hacked the federal system.

And it seems their UnSub was going after someone in the Witness Protection program. So it could have only been one person connected to the satanic incidents and that had a reputation in 1985.

His next victim was going to be a doctor and this particular doctor is the one that stirred up the mass hysteria all those years ago. So in the UnSub’s mind, she’s to blame for what happened to his family. Because he did reveal a little too much of himself when he hacked the FBI with a signature like algorithm.

That algorithm of his told Reid that their UnSub worked in government and was possible NSA. And luckily Hotch knew someone there who would also be willing to hand over a name.

And what they got was Peter. Peter, it seems, used to have two parents that ran a foster home. And one day the good doctor sat all the kids down, including Peter, and she convinced them into talking about Mr. Scratch. Scratch, sadly, was a figment of their imagination. But for a while, the good doctor made these children believe their foster father has been hurting them.

So Peter’s father was locked up and during the time he was awaiting trial – someone had killed him because they too believed the children and thought the man to be a pedophile.

Though Peter grew up and eventually the stories he was told and didn’t appear to make any sense. So he did some investigating and eventually that led to him seeking revenge against everyone that “destroyed” his family. He began with his foster siblings and when he was done with them he then moved on to the instigator.

Hotch tried to save her but in the process of doing that he was dosed. And his delusions could have pushed him into doing something he would have regretted when his team arrived to save him. But, luckily, Hotch did go on to hurt anyone or himself.

Yet, the last he saw of Peter, the other man claimed to have won anyway. So what could he have meant by that? Did Hotch resist the drug or did Peter create something special just for him?