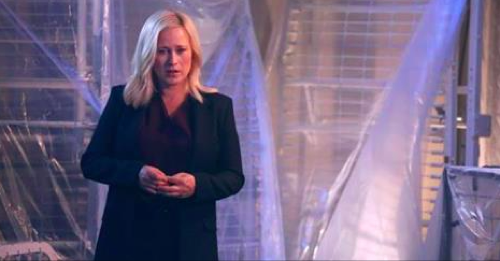 Tonight on CBS CSI: Cyber returns with an all new Sunday November 22, season 2 episode 8 called, “Python” and we have your weekly recap below. On tonight’s episode, Avery (Patricia Arquette) risks her life to capture FBI Cyber’s most wanted criminal.

On the last episode, a woman was murdered while she video chatted with her parents. Avery’s skill was tested when she interviewed the only witness, an agoraphobic neighbor who was suffering from PTSD following the incident. Did you watch the last episode? If you missed it, we have a full and detailed recap right here for you.

On tonight’s episode as per the CBS synopsis, “Avery risks her life to capture FBI Cyber’s most wanted criminal, after he murders her friend, an Interpol agent.”

Tonight’s season 2 episode 8 looks like it is going to be great and you won’t want to miss it, so be sure to tune in for our live coverage of CBS’s CSI: Cyber at 10:00 PM EST! While you wait for our recap hit the comments and let us know how excited you are so far with this season.

Agent Rupert Flemming of Interpol was in New York City to meet an informant when he was brutally murdered by the notorious criminal Python.

Python had been at the top of the Cyber Unit Most Wanted list since their very beginning. However the feds have never managed to catch him and Agent Flemming wanted to be the one to bring him in. So that meeting with the informant had been about Python.

A person calling themselves Darko had contacted Flemming with information on Python. But what set the informant apart from the many hacks that have claimed to have information was the fact this Darko had known Python’s real name. Therefore Flemming began to think of Darko as a real lead and was supposed to meet them when Python found the agent first.

Python went on to torture and then kill Flemming. Yet to make a point he had called Avery with Flemming’s phone and made her listen in as her very good friend was killed.

So on tonight’s episode of “CSI: Cyber”, Python had sent a message to the Cyber Unit. He warned them that if he kept trying to find him then they were going to end up just like Flemming. And rather than deter them, what he did only made them want to capture him all the more.

Python had crossed the line when he killed one of their own and so it became imperative for them to bring him in. But they had a problem. Python had so far been too good even for their best computer guys. Thus to get to Python the Cyber Unit first had to find Darko.

And Darko had gone dark when word reached him that Python was looking for him. So when a sting no longer became possible, Krumitz went out and found the last person that Dark had been in communication with. Which turned out to be an informant of Mundo’s.

Bernie or Fresh as he likes to be called had chatted with Darko online and he knew that Darko had been trying to pass off things to sell. Now Fresh had turned Darko down but with his help the dark web was searched and Darko was eventually found. And Darko’s real name had been Teddy.

Unfortunately, though, Python had once again been ahead of the Cyber Unit and he had sent up a blue-tooth enabled sniper gun. That ultimately killed Teddy before Teddy could tell Avery Python’s real name.

However Darko had a fail-safe. Teddy’s last words were “it’s in my laptop” and so Avery took that to mean that Python’s real identity was in the laptop. And yet when the guys checked, they didn’t find anything.

In fact the only thing that Teddy’s laptop told them was that Python had infected in with malware. So Krumtiz and Nelson had gotten frustrated and that led to them getting into an argument. But then Nelson said he was going to take the laptop and bring it down on Krumitz’s head. And that was what led to the breakthrough.

For it made Krumtiz wondered if the information they were looking was actually inside of the computer rather than merely on it. And so the guys found the chip that Teddy had hidden in his hard drive. Though the name they got turned out to be another shelf baby.

Shelf babies are made up people that are given birth certificates, driver licenses, and even high school records. Yet they were created by hackers. So Avery rounded up all of the shelf babies and DB ended up making a connection.

He realized that names had all been taken from books and that there had only been one name that looked real. Renetta Wilkerson. Thus Nelson and Krumtiz took a second look at the chip that Teddy had left behind and when they found Python’s journal – they used the journal in order to place the name.

And that’s how the Unit was able to find out Renetta was Python’s mother.

Python’s name actually being Dante Wilderson opened the doors suddenly and it had freaked out Python so much that he finally made a mistake. He told them that just because they found drive to Squamata doesn’t mean they could stop him.

So he declared open war on them and that’s when they didn’t realize they even had Squamata’s drive in their custody. But after they talked to Dante, the team looked and ultimately found the drives hidden in Dante’s old room at home. He had been spying on his mother you see and so he knew when she was out of the house. And then used the opportunity to plant drives in his old room.

But now everything had changed. Avery has his name and she knows what makes Dante tick. It seems he had been a loner as a kid because his psoriasis had been so bad that kids would call him snake skin or python.

And when Avery last spoke to him, she got him to make a mistake by mentioning his childhood.