Dancing with the Stars 2015 Recap – Redfoo Eliminated: Who Got Voted Off Season 20 Episode 2 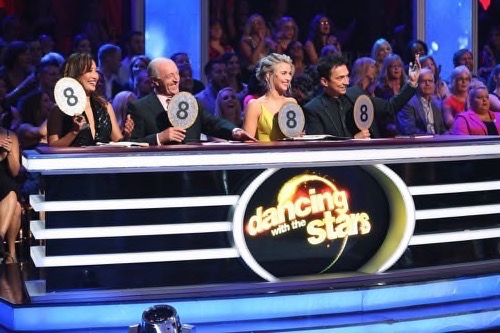 Tonight on ABC Dancing With The Stars 2015 airs with an all new Monday March 23, season 20 episode 2 and we have your weekly recap below. Follow our recap to see who gets voted off and eliminated! On tonight’s episode each couple will perform a variety of dances including the Cha Cha, Salsa, Rumba, and Argentine Tango vying for America’s vote. At the end of the night, one couple will be eliminated from the competition.

On the last episode, Dancing with the Stars was back with an all-new celebrity cast who were ready to hit the ballroom for the special 10th Anniversary season. The premiere episode kicked off with a spectacular opening number featuring the entire celebrity cast, choreographed by Emmy nominated, Mandy Moore. Each couple then performed a Cha Cha, Foxtrot or Jive, vying for America’s vote. Did you watch the last season finale? If you missed it, we have a full and detailed recap right here for you.

On tonight’s episode as per the ABC synopsis, “It’s #myjammonday this week on “Dancing with the Stars.” The 12 Celebrity Couples will dance to songs of their choice. The couples will perform either a Cha Cha, Salsa, Rumba, or Argentine Tango. The competition heats up as the first eliminated couple is sent home at the end of the night.”

Judges Comments: Len: “Your jam was in a little bit of a pickle but I thought you did an ok job.” Julianne: “Len is right, that was tough, I would have liked to see something more basic, you are very entertaining.” Bruno: “I think it is because you had your feet stuck in a jam, but you were much more erect.” Carrie Ann: “You are so earnest and ready, you are so up to the challenge. You have to learn every move though, details, details, details.”

Judges Comments: Julianne: “Last week was safe and this week was all about the sass. You came out here and improved.” Bruno: “Very good job my darling, teasing but not sleazy.” Carrie Ann: “I love this dance for you, the spring in your step was really impressive.” Len: “Great timing, 68 dancing like an 18 year old, well done.”

Judges Comments: Bruno: “You have the flash and dash, supreme selling power. You have to work on your arms.” Carrie Ann: “You guys looked like a fairytale. I was really impressed with the routine.” Len: “I liked the footwork, you had style and pinache, you really enjoyed yourself.” Julianne: “You did great, but the frame is about attitude, keep that in mind.”

Judges Comments: Carrie Ann: “You gave it to me, that was really good. Your legs were better, you need to articulate more though.” Len: “It was fun and kinky.” Julianne: “I really want to see you in this competition and well done to you. You need to work on getting grounded into the floor, it will help you have confidence.” Bruno: “If you got it, flaunt it. You don’t know what to do with your body, you need to work on weight distribution.”

Judges Comments: Len: “I love Motown and you were going to town. I got Scarlet fever here.” Julianne: “That was like a Broadway performance, it was beautiful.” Bruno: “You two can paint the town red, you really did well, you were light on your feet.” Carrie Ann: “I am truly impressed, you are in the game.”

Judges Comments: Julianne: “You are pretty much a powerhouse. You were super sharp and super quick, I think you need to breath a bit.” Bruno: “I like that you have a sharp sense of purpose. You attack like a warrior on a mission.“ Carrie Ann: “I like the choreography, I think you stepped hard and with purpose.” Len: “I wanted a tad more Cha Cha Cha, but you can dance.”

Judges Comments: Bruno: “You went from running on empty to running on plenty. That was ignited, great.” Carrie Ann: “This week you were so in the zone.” Len: “You were great, way to go.” Julianne: “That was awesome.”

Judges Comments: Carrie Ann: “You are in it to win it, really nice.” Len: “Your suit is older than you and you have so much maturity.” Julianne: “You came out here with such intensity and I think it is not the last time we’ve seen that.” Bruno: “Your maturity and your growth in a week are great, this competition is better and better, you are a potential winner.”

Judges Comments: Len: “I thought the rhythm in your hips warmed my soul.” Julianne: “You musicality is on track, it is your advantage that you know your body so well.” Bruno: “It was sexy, you two are hot. The way you used your core made you so stable on the floor.” Carrie Ann: “It was definitely hot, the way you know how to manipulate your energy was great.”

Judges Comments: Julianne: “That was so beautiful, so graceful and incredible for week two. Although, I felt that there was no connection in the first part of the dance.” Bruno: “Your flow was flawless, it was just fantastic.” Carrie Ann: “The quality of motion was spectacular, you became one with all of us.” Len: “It was clean, it was quick. It was fantastic.”

Judges Comments: Bruno: “The hair and the look, slick. The Fox Trot, even slicker.” Carrie Ann: “I love the look, you are so handsome and hot. What I love is that you are so presentational, you are still Riker though.” Len: “You could refine your hold a little bit, but it was great.” Julianne: “You have dynamic ability, I loved the choreography.”