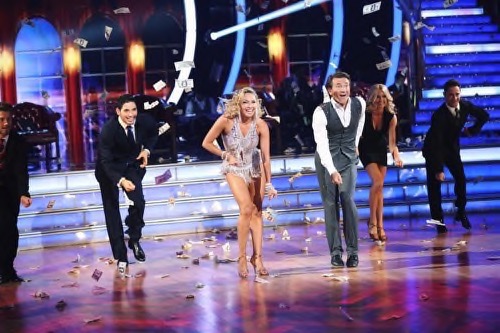 Tonight on ABC Dancing With The Stars returns for a second week with #myjammonday.  On tonight’s episode the 12 couples dance to their favourite jams.  Robert Herjavec and his professional dancer Kym Johnson danced a Foxtrot to Robert’s favourite jam, “You Make Me Feel So Young” by Michael Buble.  Did you watch tonight’s episode? If you missed it we have a full and detailed recap, right here for you. Did you miss any of tonight’s performance videos? If you did we have them all, right here for you!

Tonight on DWTS each couple will perform a variety of dances including the Cha Cha, Salsa, Rumba, and Argentine Tango vying for America’s vote. At the end of the night, one couple will be eliminated from the competition.

On last week’s premiere episode of DWTS Robert performed a Cha Cha and the judges scored Robert a 28/40 for his performance.  Len loved his performance and had this to say, “You shocked me, I thought the shark was going to be a fish out of water. You are too light on your feet though and your hips could have worked a bit more. We want to see you grow and go.”

Judges’ comments for Robert’s Foxtrot: Bruno: “You have the flash and dash, supreme selling power. You have to work on your arms.” Carrie Ann: “You guys looked like a fairytale. I was really impressed with the routine.” Len: “I liked the footwork, you had style and pinache, you really enjoyed yourself.” Julianne: “You did great, but the frame is about attitude, keep that in mind.”

Watch the video below and let us know what you think, do you agree with the judges comments? Do you think Robert did enough to avoid elimination next week?  Sound out in the comments and let us know your thoughts?