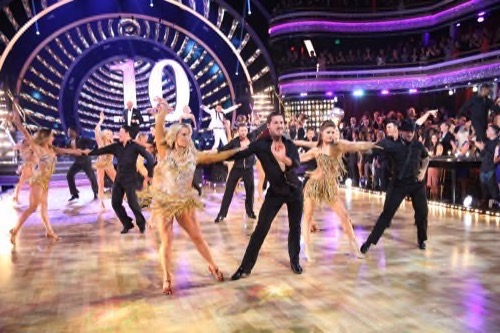 Tonight on ABC Dancing With The Stars 2015 airs with an all new Monday April 27, season 20 episode 7 and we have your weekly recap below. On tonight’s episode an elimination occurs after the seventh week of performances, which feature songs from different eras.

On the last episode, the eight remaining couples celebrated the season with individual routines to a variety of spring break inspired songs plus a competitive team dance performance. For the team dances, the cast had been divided into two groups, #TeamTrouble and #TeamYOLO. The teams competed in a dance-off, vying for a perfect score from the judges. At the end of the night, one couple faced elimination. Did you watch the last episode? If you missed it, we have a full and detailed recap right here for you.

On tonight’s episode as per the ABC synopsis, “on Dancing with the Stars the seven remaining couples will perform an iconic number from a different time period on “Era’s Night.” Dance styles include Modern Charleston, Contemporary, Argentine Tango and a futuristic Jazz number. The couple with the highest overall score of the night will be granted immunity from elimination. The remaining couples will then compete in a dance-off to earn extra judges’ points in an effort to increase their overall score. At the end of the night, one couple will be sent home.”

Judges Comments: Len: “Loads of energy, all the way home.” Julianne: “Oh my gosh, you are both so innovative. You need to work on figuring out your height difference though.” Bruno: “It was like twinkle toes on the field of dreams. The content was excellent, but tighten up on your hold next time.” Carrie Ann: “I agree with Bruno, it was fantastic, not as good as last week. You have a new glow but do watch your chin, bring it down.”

Judges Comments: Julianne: “Last week was your come back week, this was also awesome. I loved everything as a whole.” Bruno: “You do take us on a smooth cruise, you are turning into a dancer.” Carrie Ann: “I think you are the underdog, but you are in the right place at the right time. You have the momentum, you are the most exciting one for me to watch right now.” Len: “You have never danced before, I do see improvement. Just polish up the moments when you are in hold.”

Judges Comments: Bruno: “The all American girl, wholesome like apple pie. I loved the nostalgic look, very very well played. When you throw your free hand, retrieve it faster.” Carrie Ann: “I am actually torn up about this dance, I think we lost a little something that makes you so spectacular. It was too safe and agree with Bruno about your arms.” Len: “Better to be safe than sorry, I liked the mix. I liked the whip on the turns, I liked the dance very much. Maybe it needed a tad more flare.” Julianne: “I get the frustration, it is exhausting and tiring, but don’t forget who you are. You did an awesome job, agree about your arms. Overall you are so awesome.”

Judges Comments: Carrie Ann: “What was that? That was insane, you gave us it all, you gave us attitude.” Len: “It was strong and it was clean, you are twice the man from most guys. As good as it is being with a group of back up dancers, it is as good as I have ever seen from you.” Julianne: “You had swag, you had groove. In the last few weeks you have improved.” Bruno: “You two are bad ass hot and cool at the same time.”

Judges Comments: Len: “This week you are up.” Julianne: “Every week you are happy go lucky, tonight it was different, it was clean, the timing was so much better.” Bruno: “I got the funny feeling Robert knows what he wants from Kym, everything.” Carrie Ann: “The chemistry was dynamic, although sometimes I felt like Kym was too much woman for Robert.”

Judges Comments: Julianne: “You did amazing Sasha, taking over for Derek. Nastia you did great, this was hard in general, you guys killed that dance.” Bruno: “That was the best, it was unexpected and so many elements were there that surprised me.” Carrie Ann: “I was so proud of you, it was insane, you were just dancing.” Len: Thumbs up.

Judges Comments: Bruno: “You were awesome, the sync was perfect.” Carrie Ann: “The sync was fantastic, it was executed well.” Len: “I must say, you have a fertile and creative mind. Well done.” Julianne: “It was intricate and clean, it took so much control, fantastic.”

Judges Comments: Len: “It is a bit like my bank account, not much in it.” Julianne: “You both were tight, but different.” Bruno: “Both very spicy, with different flavors.” Carrie Ann: “Riker/Allison balls to the walls. Willow/Mark you showed us you can dance.”

Judges Comments: Julianne: “This is really difficult, you both did well.” Bruno: “It is very hard, hip action was great, you both did very well.” Carrie Ann: “One was support tight and clean with no content, the other had a lot of content with loads of mistakes.” Len: “Both were similar.”

Judges Comments: Bruno: “It was so sophisticated and dazzling.” Carrie Ann: “One of you won hands down.” Len: “Chris if you didn’t have bad luck you wouldn’t have luck at all.” Julianne: “It was better than expected.”

On this seventh week of competition, the couple leaving is Willow Shields and Mark Ballas. This means Rumer and Val are safe.