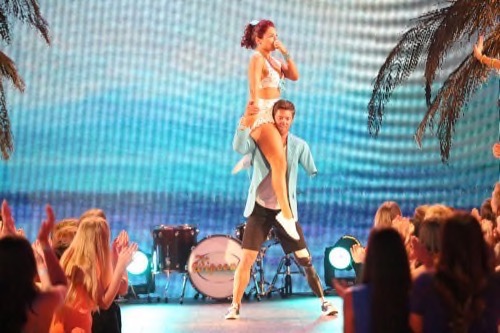 Tonight on ABC Dancing With The Stars returns for a seventh week and Noah Galloway and his professional dancer Sharna Burgess danced a 70s Jazz routine.  On tonight’s episode the the seven remaining couples will perform an iconic number from a different time period on “Era’s Night.”

Dance styles for tonight’s episode include Modern Charleston, Contemporary, Argentine Tango and a futuristic Jazz number. The couple with the highest overall score of the night will be granted immunity from elimination. The remaining couples will then compete in a dance-off to earn extra judges’ points in an effort to increase their overall score. At the end of the night, one couple will be sent home.

On last week’s episode of DWTS Noah performed a Rumba routine and the judges scored Noah a 29/40 for his performance. Len loved his performance and had this to say, “You never cease to amaze me, it had some lovely action, you were right on time – you are an amazing guy.”

Judges’ comments: Carrie Ann: “What was that? That was insane, you gave us it all, you gave us attitude.” Len: “It was strong and it was clean, you are twice the man from most guys. As good as it is being with a group of back up dancers, it is as good as I have ever seen from you.” Julianne: “You had swag, you had groove. In the last few weeks you have improved.” Bruno: “You two are bad ass hot and cool at the same time.”

Watch the video below and let us know what you think, do you agree with the judges comments? Do you think Noah did enough to avoid elimination next week? Sound out in the comments and let us know your thoughts?