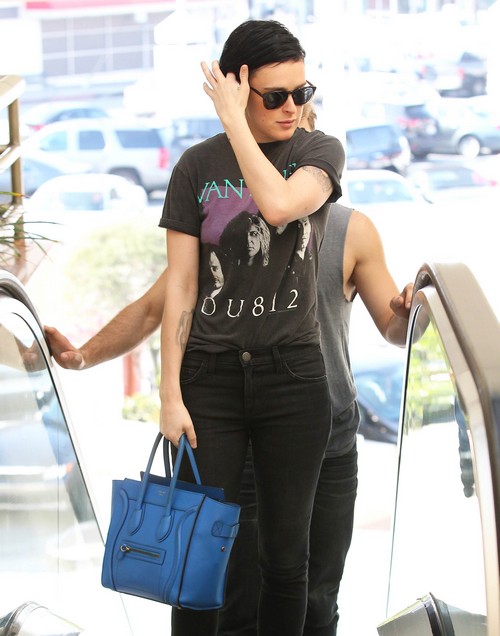 The Dancing With The Stars Season 20 cast was recently unveiled by ABC, and among the celebrity dancers on the list was Demi Moore’s 26 year old daughter Rumer Willis. As always Rumer’s wacky and insecure mother is trying to steal her spotlight – and apparently her dancing partner Val Chmerkovskiy. A new report from GLOBE Magazine reveals that Rumer has banned her mother from showing up to her Dancing With The Stars gig, but the always self-centered Demi Moore refuses to sit out of any potential photo-ops.

The March 23 edition of GLOBE Magazine goes on to say that Demi Moore keeps crashing Rumer and Val’s rehearsals. According to the magazine’s Dancing With The Stars insider, “Rumer is furious. She doesn’t want her mom hogging the limelight. It is her chance to make a name for herself, but Demi is going to ruin it by sitting right in the front row where the TV cameras can focus firmly on her.

As if Rumer wasn’t embarrassed enough by her mother crashing her rehearsals – she apparently comes to see Rumer’s dancing partner Val Chmerkovskiy, not her daughter! Globe’s DWTS insider snitched to the magazine, “Demi adores Val. She just shows up. It’s very embarrassing because Demi can’t stop flirting with Val, and keeps wanting to dance with him. She won’t give Rumer any space, it’s causing a lot of tension.” You would think that after Demi stole her boy-toy Sean Friday from her daughter Rumer, she would be used to her mother’s cougar-hunting ways by now. Val Chmerkovskiy has always been quite the Cassanova on Dancing With The Stars – so it’s safe to assume he probably isn’t helping matters any and is encouraging Demi’s advances with some flirting of his own.

We totally get that Rumer wants to do her own thing, and be famous for something other than being Demi Moore’s daughter. But, the bottom line is – she never would have been invited to compete on Dancing With The Stars if it weren’t for the fact that she was Demi Moore’s daughter. The producers most likely selected Rumer just because they knew her headline grabbing mother Demi would be in tow, and stir up some buzz for Season 20. The all new season of Dancing With The Stars is set to premiere on March 16th 2015, do you think Rumer Willis has any chance of winning? Share your predictions in the comments below!