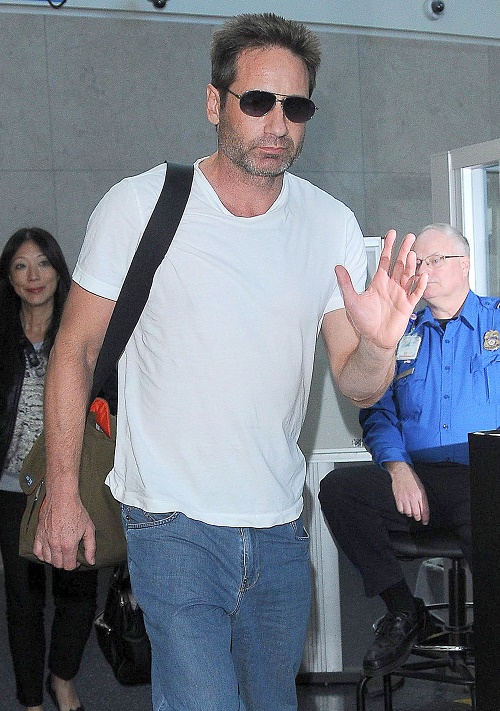 David Duchovny and longtime partner Tea Leoni may be divorced, but they want the world to believe that they are the best co-parents to ever grace the planet. After years of speculation and cheating scandals, David and Tea officially divorced in August 2014 and set up joint custody of their children Kyd (12 years old) and Madelaine (15 years old).

In December 2014, Page Six reported that the divorcees were spotted on a plane with their two children en route to Turks and Caicos to spend the holiday together as a family. Oddly enough, besides the Page Six report, Duchovny and Leoni were never actually spotted at the airport nor in the Caribbean together. As a matter of fact, no other site other than Page Six even received tips from anonymous fans that Tea and David were spotted on the plane – which is incredibly rare.

David Duchovny’s ex-wife, Tea Leoni, has been accused on more than one occasion of leaking information or faux tips to the press, and fans of the celebrity couple are positive this was the case in December 2014. Generally, when Tea and David head out together or with their new significant others, you can track the celebrity spottings that are called into various media machines across the internet. So it’s incredibly strange that Page Six is the only website or tabloid that received a tip that David and Tea were on a plane to the Caribbean with their two children – and it seems even more suspicious that tipsters were calling in reports of seeing Gillian with David over the holidays and not Tea.

So what is going on? Well, rumor has it that Tea Leoni leaked fake information to Page Six that she and David were headed on vacation with their two children – to maintain her image as a “good mother” when, in actuality, Tea spent the holidays with her new boyfriend and Madame Secretary co-star Tim Daly – and it was David’s longtime girlfriend Gillian Anderson that spent the holidays in the Caribbean with him and his children. What do you think? Did Tea leak a story to Page Six that she was spending the holiday with David and her kids, when in actuality it was Gillian Anderson who did? Hare your thoughts and theories in the comments section below!