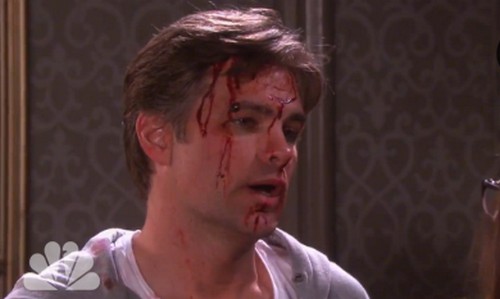 “Days of Our Lives” spoilers for Wednesday, August 19, tease that Clyde (James Read) will make it perfectly clear that Aiden (Daniel Cosgrove) needs to mind his own business. Despite Clyde’s thinly-veiled threats, Aiden has been doing some digging. Clyde will rough up Aiden and let him know that he’s running the show now. Aiden will have to drop any ideas of bringing down Clyde or next time he’ll end up with far worse than a few blows to the head.

Other DOOL spoilers reveal that JJ (Casey Moss) will find himself in quite a predicament. JJ took a big risk by sneaking into Kyle’s (Michael Cardelle) apartment. Now that Paige (True O’Brien) and Kyle have returned, JJ’s in a tight spot. Fortunately, Paige locked eyes with JJ as they started to enter and she may be able to create a diversion. The question is: will Paige be willing to help JJ after everything he’s done? It appears Paige will decide to get her ex out of this sticky situation. Paige is furious with JJ, but she really does care about him deep down. Later this week on “Days of Our Lives,” JJ will try to convince Paige that he’s still in love with her.

Across town, Marlena (Deidre Hall) will get updates on a secret John (Drake Hogestyn) has been keeping from her. We don’t know for sure what John’s been hiding, but “Days” rumors hint that he may be hoping to do a bit of undercover work. If that’s the case, John may find himself teaming up with Patch (Stephen Nichols) in the near future. Word has it this dynamic duo will soon begin the hunt for Bo (Peter Reckell). Of course, Marlena won’t be happy about John potentially putting himself in harm’s way. It looks like John will have to turn on the charm to get Marlena on his side once again.

Meanwhile, Rafe (Galen Gering) will consider a career move of his own. Ever since Rafe was kicked off the police force, he’s been stuck in a ho-hum position as manager at the club. Rafe may not be able to get his old job back, but whatever he ends up doing could draw him closer to Hope (Kristian Alfonso). DOOL rumors suggest that Rafe will continue to fall for his good friend. Stick with “Days of Our Lives” to see how long Rafe can fight his feelings.

So “Days” fans, what do you think about the news that Clyde and Aiden will face off? Will Paige help JJ out of his jam? What secret has John been keeping under wraps? What does the future hold for Rafe? Let us know what you think in the comments below and don’t forget to check CDL often for the latest “Days of Our Lives” spoilers, rumors, updates and news.