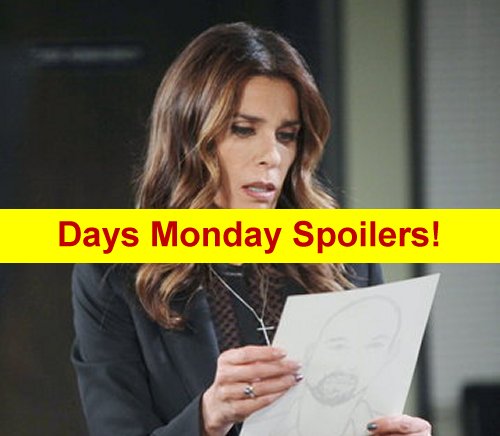 “Days of Our Lives” (DOOL) spoilers for Monday, December 7 tease that Hope (Kristian Alfonso) will have some startling news for Roman (Josh Taylor) and Rafe (Galen Gering) is getting worried about the tactics Hope is using to gain information about Bo’s (Peter Reckell) captors.

Hope certainly can’t be anywhere near a revolver right now. Roman will have a chat with Hope about dialing down the rage, but she’ll insist that she might as well quit the police force.

Hope plans to get vengeance one way or another – it doesn’t matter if Roman is on board or not. Of course, Roman won’t want Hope to make any rash decisions. Hope needs time to grieve and that’s what Roman intends to give her.

DOOL spoilers say Roman will put Hope on leave so she can heal without the pressures of her job. Unfortunately, Hope won’t take Roman’s advice. Later this week, Hope will have another shocking run-in with Dr. Malcolm (Adam Leadbeater).

When Hope is in revenge mode, there’s no stopping her. Meanwhile, Abigail (Kate Mansi) will pass out from smoke inhalation. Abby is in bad shape thanks to Ben’s (Robert Scott Wilson) ruthlessness.

Luckily, Chad (Billy Flynn) will step up to save the day. “Days of Our Lives” spoilers reveal that Chad will break free from his restraints and carry Abigail out of the burning cabin. DOOL viewers won’t want to miss Chad’s heroic rescue.

Other “Days” spoilers indicate that JJ (Casey Moss) and Lani (Sal Stowers) will try to track down Ben. JJ isn’t even a full-fledged cop yet and he’s already going on dangerous missions. It’s easy to see that JJ has courage and good instincts.

If JJ can stick with it, he should be a valuable asset to the Salem PD in coming years. As the newbie on the force, Lani is earning her stripes as well. Stay tuned to “Days of Our Lives” for updates on how they’ll grow in their positions.

So Days fans, what do you think about the news that Hope will be put on leave? Will Hope’s strategies get even bolder now that she’s going after the baddies on her own? Are you glad Chad will be the one to save Abigail’s life?

Will JJ and Lani take care of business? Let us know what you think in the comments below and don’t forget to check CDL often for the latest “Days of Our Lives” spoilers, updates and news.