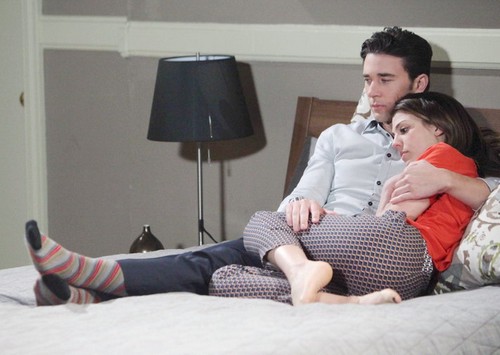 Here are more hot “Days of Our Lives” spoilers for Tuesday, September 8 – and we see that things will look bleak for Chad (Billy Flynn). Chad has had a rough couple of weeks and it’s only going to get worse from here. When Chad got drunk and crossed the line with Serena (Melissa Archer), he inadvertently made himself a person of interest in her death. Now the evidence is piling up and Chad doesn’t know what to do.

Chad will soon become a full-fledged suspect in not one, but two murders. Based on DOOL’s weekly promo, it appears JJ (Casey Moss) will discover Paige’s (True O’Brien) dead body. Unfortunately, it won’t take the cops long to find proof that points to Chad. Someone obviously wants Chad to take the fall for this and he or she won’t rest until Chad is locked up. “Days of Our Lives” spoilers indicate that Chad will be arrested later this week.

In the midst of the chaos, Chad will feel compelled to tell Abigail (Kate Mansi) something that’s on his mind. “Days” spoilers reveal that Chad will make a stunning admission. We don’t know for sure what Chad will confess, but it might have something to do with Serena’s murder and Stefano’s (Joseph Mascolo) offer. Perhaps Chad will admit that he doesn’t remember everything that happened that night and Stefano is the only one who can clear his name. Of course, that would mean Chad would have to resume his pursuit of Abigail. It seems likely that Chad will profess his love for Abigail once again and assure her that he won’t put her in harm’s way. With a second killing tied to him, will Chad be able to keep his promise? Stick with “Days of Our Lives” for updates on the developing murder mystery.

Meanwhile, Aiden (Daniel Cosgrove) will get shadier by the minute. DOOL viewers will finally learn more about Aiden’s big secret. The rumors suggest we might learn the identity of Aiden’s employer. Aiden is really feeling the heat right now. Hope (Kristian Alfonso) has been dragging her feet on accepting Aiden’s proposal and he’s having a hard time keeping his cool. Luckily, Hope will soon give Aiden the answer he’s been looking for. Hope will agree to marry Aiden, but that doesn’t mean Aiden’s plan will run smoothly. Aiden will undoubtedly hit a snag in his scheme down the road. Stay tuned to the NBC soap to see if Aiden can pull off this scam or if it’ll all blow up in his face.

So “Days” fans, what do you think about the news that Chad will be accused of killing another fellow Salem resident? What will Chad confess to Abigail? Will Abigail remain in Chad’s corner? Will Aiden’s employer urge him to pick up the pace on his plan? Let us know what you think in the comments below and don’t forget to check CDL often for the latest “Days of Our Lives” spoilers, rumors, updates and news.