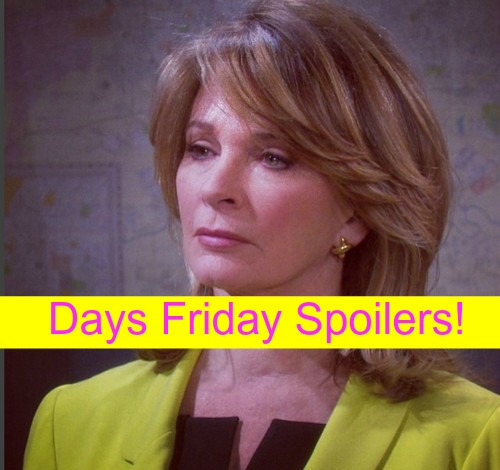 “Days of Our Lives” spoilers for Friday, October 30, reveal that Caroline (Peggy McCay) will have another dream about Bo (Peter Reckell) and the danger he’s facing. Steve (Stephen Nichols) is the only one who seems to believe Caroline’s visions really mean anything.

Unfortunately, Steve will be in peril as well. Bo insisted on taking off despite the severe storm and the plane’s lack of a radio. The pilot’s not in great shape either thanks to a blow to the head. Nevertheless, Bo is determined to return to Hope (Kristian Alfonso) before she ties the knot with Aiden (Daniel Cosgrove).

DOOL spoilers tease that Caroline’s vision will prove to be accurate as Bo and Steve face a life-threatening situation. The plane will quickly lose altitude and they’ll prepare for a crash landing. Will they be able to regain control of the jet or are they headed for disaster?

It’s tough to say, but we know Bo and Steve will make it out of this alive. However, this potential crash could cause a major setback in their plan to stop Hope’s wedding. Based on “Days of Our Lives” spoilers for next week, it doesn’t look like Steve and Bo are going to make it back to Salem in time.

Meanwhile, Chad (Billy Flynn) will be exhausted and frustrated after dealing with Justin’s (Wally Kurth) badgering. When Chad woke up from his coma, he had no idea what was going on. The last thing Chad remembers is having a round of drinks with Serena (Melissa Archer) at the club.

Marlena (Deidre Hall) will decide to ask Chad a few questions to find out if he’s being honest. Chad may be short on memories, but he’s certain that he couldn’t have killed anyone. Luckily, Marlena will buy Chad’s story and she’ll do her best to help him in any way she can.

Across town, we’ll see Nicole (Arianne Zucker) offer Theresa (Jen Lilley) some advice. Theresa will start complaining about how Kate’s (Lauren Koslow) been treating her at Basic Black. This is supposed to be a partnership, but Kate is trying to run the whole thing singlehandedly.

“Days” spoilers say Nicole will urge Theresa to speak her mind. If Theresa keeps letting Kate run all over her, she’ll never get the chance to see her dream become a reality. DOOL rumors hint that the company conflict will be resolved for now, but there will inevitably be more drama down the road. Stick with “Days of Our Lives” for updates on this fashion feud.

So “Days” fans, what do you think about the news that Caroline will dream of Bo in danger? Will Bo and Steve’s plane crash? Will Marlena help Chad remember anything important? Can Theresa learn to stand up for herself? Let us know what you think in the comments below and don’t forget to check CDL often for the latest “Days of Our Lives” spoilers, rumors, updates and news.